Our fiction co-editor, Robin Lauzon, recently spoke with Dave Essinger, our Issue #9 featured fiction author. Here’s what he had to say about some of his inspirations, his approach to writing, and what he is working on now.

What inspired you to write “Persistence Hunting”?

I go for runs like this a lot, with a couple friends, and talk about nothing. If there were anything important going on in each other’s real lives, we wouldn’t know it, but that’s kind of the point, too. And not talking about anything doesn’t mean nothing important happens out there. So I started with this kind of scene, thinking about how dialogue is what we don’t say to each other, and then started playing what-if, layering in all kinds of stuff that wasn’t being said.

I hope readers take away a scene, a glimpse of an imagined world, I suppose. And like these characters, I spend a lot of time running with no expectation of ever winning a race or anything like that. So I’d hoped to communicate some sense of why anyone would do this, run just to run, and what these characters get out of that kind of outwardly pointless repetitive activity.

I’ve recently finished a novel manuscript about elite-level ultrarunners and a plane crash in northern Quebec. Presently I’m a couple hundred rough pages into a post-apocalyptic thing. I grew up a few miles from the Wright-Patterson Air Force Base in Dayton, OH, which apparently was #2 on the Russian must-nuke list after NORAD all through the Cold War, and all the fallout drills in grade school must have influenced me somehow.

Writing is an endurance sport. Tennis players, NBA stars, pro football players, most are burnt out by 30, done by 40. A writer by then is just getting started. Shout-out to Jim McManus on that piece of advice.

I don’t suppose I did anything unusual with this story, in terms of process. I try to keep things pretty visual. I usually start with a scene or two, and figure out where the gravity or importance of it is later. And then it becomes an amalgam of whatever’s interested me in a given period of time. The information on lung-packing and persistence hunting and the mechanisms of drowning were just all kind of floating around.

When I work on longer things, my process changes up a lot, and I will compose and rewrite things in different formats to keep the narrative fresh and dynamic. I’m currently rebuilding a novel from the ground up as a screenplay. This is an exercise I give my students sometimes too. Visualizing something or doing it in a different genre can always help you see something new. And no voice-over, that’s cheating.

I think it was about a baby cobra, and it was awesome. I spent a lot of time making lists on my mom’s typewriter, so I probably typed the cobra story out on that. Once we got a Commodore 64 and went digital, I earned some allowance cash by keying in her thesis on Annie Dillard. Pilgrim at Tinker Creek. Yeah.

No one I can think of that I consciously try to write like, but–Pynchon, Tolstoy, Murakami, Kundera. Joan Didion. All writers who make me think, “How did they do that? I didn’t know you could do that. How did they make that work?”

I’ve always found Sendak’s illustrations and the quiet prose of the Little Bear books entrancing. But there’s so much good stuff out there. I love that my kids love books, and that my wife Alice keeps them up to speed on all the best. My school, The University of Findlay, where I’ve taught for twelve years, keeps the Mazza Museum of children’s book art, which is the largest collection in the world and a fantasic resource. I tell the Children’s Book Illustration majors in my writing classes that kids’ stories need all the same plot and character considerations as adult’s fiction. And they do, the good children’s books do that. 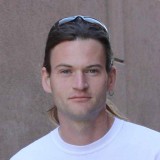 Dave Essinger’s fiction and essays appear in ellipsis…literature & art,Pilgrimage, Sport Literate, and elsewhere, and he’s recently received a Notable mention in The Best American Sports Writing 2014 and been shortlisted for the Caledonia Novel Award. He received his MFA from the School of the Art Institute of Chicago, and currently teaches creative writing and edits the literary magazine Slippery Elm at the University of Findlay, in Ohio. He’s currently shopping a novel about ultrarunning.