*Image: “The Risk of Being Complicated” by Lorette C. Luzajic, 36″ x 48” Mixed Media on Gallery Canvas

The wider and darker the bruise, the greater was the evidence of our commitment. In hindsight, that was a pretty unsettling attitude for a couple of twelve-year-old girls to have about their favorite pastime. Sandy and I invented “tennis basketball” one summer in the early 1980s, ostensibly just to occupy our bored selves. In front of her house in the street was the best place to play, the large concrete divisions on the subdivision’s paved roads making a convenient court. All we needed was a basketball pumped to near-bursting. Drop the ball, let it bounce once, and then whack it as hard as possible with our forearms into each other’s courts. It was essential to use a clenched fist or there would never be enough resistance to get the ball across the line. A really vigorous match would result in long purplish green bruises from wrist to elbow. We both loved to show off our wounds to other sixth graders. It’s a wonder, really, that we didn’t get reported to some child welfare agency.

But we did it for another reason that went unspoken. We invented a game we had to play outside so we could stay away from Conor.

Sandy’s family was a glossy, fascinating kind of feral. I saw behaviors in that house that I never saw at home. Conor, Sandy’s only sibling, was wild and angry in a way I’d never seen at close range. He had a perpetual scowl and a bristling negative energy that said stand back. He projected a desire to punish someone for something, though who and for what was always up in the air. Sandy’s father drank an elegant whiskey in the middle of the day and seemed to live behind newspapers as if nothing were happening around him. He was the alter ego of my dad who drank coffee only. Who read the newspaper voraciously but could never have stayed placid if our family home were as chaotic as Sandy’s house: yelling, doors slamming, televisions blaring, telephones ringing, and dogs barking. Her father just glanced over his newspaper if the shouting went on for too long. On several occasions I saw his fingerprints, heavy with newspaper ink, on the kitchen counter and on the toilet paper in the bathroom, but I never saw other evidence of his presence in the house outside of his lush, ultra-suede armchair in the living room.

Sandy’s mother had been a professional glamour model. She worked when advertisers were fond of cat-eyed, bathing-suited beauties sucking on long cigarettes and balanced on high heels. In one magazine ad Mrs. Stedman was smoking, semi-clothed, at the Parthenon. Sandy had all of her mother’s beauty, shiny dark hair and eyes, beautiful skin that turned the perfect shade of bronze in the sunlight. But she also emanated a raggedy-edged confusion at times and often seemed unsure what might happen next, even in the most ordinary situations. It feels to me now like an unextinguished but fading hope that she was safe.

Sandy’s parents were there and not there, but Conor was always there. His hair was fuzzy and thick and seemed to stand on end. His skin was bumpy and sallow, and his eyes burned as if they could set things on fire. When he screamed at Sandy, or even swung at her with his fists or a bicycle chain or hurled that helmet in her face, I kept waiting for their parents to stop him. Why didn’t they stop him? They treated him like a bad pet no one knows how to manage that just gets kept in the garage. He always seemed to end up snarling in the basement.

I preferred it when Sandy came outside to play. Outside was our space. Room to run, and to invent the world the way we wanted it to be. We set the stage. We defined the rules. We were in control. We stayed out as long as we could, but inevitably we would be called back inside, into our separate homes.

The last time I was anywhere inside with Sandy, we were in sixth grade. She had a boy-girl party in the basement at her house. Larry Hagman was J. R. Ewing on television in the background as Sandy muted the Dallas dialogue with the Charlie Daniels Band. “The Devil Went Down to Georgia” was at the top of all the music charts, and there was nothing more fun than lining up, boys on one side and girls on the other, and singing every line of the song back and forth at the top of our lungs. There were cans of Coors Light beer out in the snow off the basement porch. I tried to pretend I didn’t know that Conor was drinking beer and taking some of our twelve-year-old girlfriends outside to drink it with him. Sandy had to know he was doing that, too, and she turned up the music and wanted us to sing louder. I thought she was crazy, it was plenty loud enough.

After dozens of singing challenges, everyone started getting tired. I knew it was time to walk home. Before I left the basement I saw the door to Conor’s room. I knew he was outside. I walked through the door. I had seen Conor on the first floor of the house many times, but I had never seen his hideout, his bedroom, the place where he went when he wasn’t terrorizing his sister directly and me by default.

I opened the door to his room and stepped across that thick, padded carpet in the dark, with only the light from his red lava lamp. There was a faint odor—not cigarette smoke, but something like it. I saw many things that in my memory now are only generic, nondescript, like his waterbed and his trophies. It was the huge poster of a group of Dallas Cowboys Cheerleaders that I can’t forget. And was it so awful, the girl in the middle with that look like she was annoyed and hungry? Was it the worst thing I could have seen in that room, the pushpin stuck in her crotch? It was such a small thing, but it resonated inside me like violence.

Years later, after college and marriage and young adult adventures, I moved back to my hometown. I hoped to learn that Sandy wasn’t there anymore. I imagined that she had a degree, a functional family, people who loved her, maybe a career off to a great start. I wanted her to have escaped, but that had not happened. Old high school friends told me she was addicted to drugs. They said her own dog had bitten off a piece of her face. Whispers at social events implied she’d been so numbed out when it happened that she hadn’t felt the bite. I wanted to cry, but whatever has to shift when tears come wouldn’t move. I didn’t want to believe any of this. I pushed it away and held it there, paralyzed with grief and emotional incompetence. I didn’t know this person who couldn’t cry.

And then one day I saw her walking down the hill to town and I saw what was left of her beautiful face. I thought about stopping the car, but I didn’t know what I would do after that. I felt suddenly just as I had when we were children. My chest cracked, and all the lost things started falling into the gap. The light in Sandy’s face had dimmed almost to black but her eyes still strained outward for something. I imagined in a split-second pulling over and opening the door.

“Sandy, hey, it’s me! Are you okay? Do you need a ride downtown?” But just as quickly I saw how that, too, was sure to fall into a dark place with no bottom. I didn’t want to learn that she didn’t know who I was, and I kept going. I also didn’t know how to stop without inviting danger to climb into my life and ride shotgun. Only a few months later I learned she was dead. She had drowned alone in a private swimming pool. There were the usual speculations about how it had happened, none of which bear repeating now. They were not established facts, and any timeline for the drowning didn’t start anywhere close to when it began. She had been going under for a very long time.

The same year I’d walked into Conor’s room, I stood outside on our back deck watching a woodpecker hammer away at a dying tree in the woods. Sandy’s house was just down the street, and those woods were behind her house, too. I wanted that great, prehistoric-looking bird to look at me. I wanted to break its concentration somehow, just have it turn and make eye contact. I focused, willing him to look at me, not realizing that I was grinding my bare heel into the cement of our deck. The creature flew off without acknowledging me, and I was left with a bloody foot. I hopped back through the house, trying not to leave any traces of blood before I could get to a place where I could tend to myself.

I conjure images beyond what I knew of Sandy, now. Who she was when we were young has faded in my mind’s eye, while my memories of the woodpecker’s eye, the push pin, and the dirty newsprint fingerprints have grown sharper, as has my sense of loss. Sometimes I imagine I see her holding her dog in her lap or swimming at night. These visions comfort me to some extent, but in them she is always alone, no other people appear in these thoughts. When I see her swimming she’s taking long strokes across the water, moonlight on her wet skin. She reaches the end of the pool, turns around, and now she is headed back toward me. That’s where I always end it. 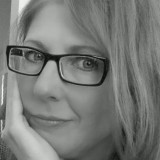 Elizabeth Gaucher received her BA in History from Davidson College and her MFA in Creative Writing from West Virginia Wesleyan College. She lives with her family in Middlebury, Vermont. She is the founder of an online journal for creative nonfiction, Longridge Review. Her work has appeared in Still: The Journal, The Pikeville Review, and Brevity‘s nonfiction blog, among other print and online publications.