Our fiction co-editor JD Fox recently had this exchange with Tyler Barton, our Issue #20 featured fiction author. Here’s what he had to say about the inspiration and life experience behind his story “The Record We’re Writing,” the joy of revision, and the worst best writing workshop experience we’ve heard of.

A professor of mine began our Fall workshop last September by emphasizing the often over-looked importance of setting. She pushed us to pick not only a setting we knew well, but one that others did not know well, and if possible, one that characters felt tied to in specific, meaningful ways. I chose my hometown (Dover, in south central PA), which always had this weird flavor of being half suburban, half rural. So close to York City that you could ride your bike there, but where the smell of manure and the slight drawl of our fathers’ speech permeated. That provides the tension of Jackson feeling drawn to the city and its culture, while the father is pulled further into the country, to the racetrack out near Gettysburg. I saw a conflict in that. Turns out, after many drafts and pages of deleted setting detail, the story’s location really falls into the background (as it should). But I do feel like this is the first time I wrote a story that belongs in a specific place. Now that I think about the last eight months of writing, it kind of set me on a streak of setting stories in York, PA.

Why go-karts? Obviously they serve the plot and help with character development, but do you have a personal connection with the vehicles that makes them good fodder for storytelling?

A lot of this story came from a personal place. I raced go-karts from age nine to thirteen. My experience with racing was similar to Jackson’s, but maybe less intense or angsty. My dad and I both loved racing, but on the longer, hotter days I just would have rather been home with my friends playing video games or skateboarding.

Looking back, I realized the racetrack was a unique place. That opening scene came so easy and natural for me. I really felt like a fish out of water when I was there every Saturday, knowing nothing about mechanics or racing, only following my dad’s lead and driving the kart in circles for fifteen minutes a night. Of course, only about a fifth of the story takes place at the track, but it provides the event that pushes the main character to want to change his life. The big challenge was writing that chase scene at the end. I had never written anything so fast-paced, and I hadn’t driven a go-kart in over ten years.

Another thing I found while working on it was that the issue of safety (and the father’s desire for the son to continue taking part in something so unsafe) was reminiscent of a more topical discussion happening in this country about whether or not children should be playing football. You know, with all the damage that is done to their brains. There was a connection there between racing helmets and football helmets, how they aren’t really enough to keep you from serious injury. I’d read Steve Almond’s Against Football last year (and I got to sit down and interview him over coffee!) so I think that debate was sitting somewhere in my subconscious.

I hope readers can interpret Jackson’s insistence on “not being afraid” of racing (but rather being bored by the whole production of it) as a sublimation of his deeper, newer fear of death and change. But really, I just hope they like the MarioKart references (haha).

This morning I started a story about an amateur rapper who records mix tapes inside a wooden shack built on a paintball field. I just finished another about a barbershop quartet who stalks the grandson of their recently deceased tenor. I love writing short stories. Mainly because I’m very afraid to write a novel. (Don’t tell Geoff Herbach, my professor for this fall’s Novel Workshop).

Write past the ending.

I’ve been writing seriously (whatever that means) for about four years, and I don’t think I’ve ever had the same process. I think I need to be writing for at least four more before I get a system down. This story was the most highly-revised story I’d written until that point. Since I’ve started grad school, I’ve found that revision is eighty percent of the work on every piece. I actually prefer it that way. When I’m stuck or finished for the day, I’ll take a bike ride and let revisions, connections, and additions come to me naturally. I pull over and take my phone out and tap something down. I depend on this for most of my good ideas, which after that initial sentence, always come during revision.

I really started with that setting and just waited for the conflicts to appear. The death of Austin sets in motion Jackson’s need to act (quit racing) but it’s tied up in his friendships and with his relationship to his dad. I didn’t know that when I started. I started by just describing everything I remembered about the racetrack.

I was a late-ish bloomer and didn’t start until senior year of highschool. I wrote a story about a kid living in India who finds a gun in a truck and then sees someone shot and then runs to a river to throw the gun in the water. I had a gun-control agenda on my mind from an assignment earlier in that year’s English curriculum. Also I knew nothing about India. I just thought it would be exotic. So naive.

Kurt Vonnegut, George Saunders, Miranda July, and Lindsay Hunter. All for different reasons, but the one thing that ties these writers together is they take great care to make sure the reader is never bored. Even for a second. I don’t know if I achieved that with this story, but it is something always on my mind.

I see that you are a MFA candidate. What are your professional goals/plans after completing your studies?

I’m not sure. Do you have any ideas? Haha. Honestly, I visited the BWW a few years ago during a trip to Burlington and I would love to try to start something similar in Lancaster, PA (not where I’m living now, but where my heart lives). My partner and I have been putting on workshops, readings, and other literary events for a few years now–I would love to make creating/fostering literary community my life, even if it isn’t for a job.

Because we grew out of a workshop, we like to ask: what has been your best or worst workshop experience?

Well, one time my partner and I put on a workshop with the incredible poet Barbara Decesare. We asked her if she would lead a generative writing session on “love” for Valentine’s Day–how can we write about love in an honest, non-corny, unique way? In an email she told me she wanted to study “the dissection of the heart” and then joked about purchasing cow hearts for participants to cut open, to see what the heart really looked like. The day of, we found ourselves carrying boxes of cow hearts into a co-working space in Harrisburg. We laid long sheets of plastic out along the tables, pulled on blue gloves, took up scalpels, and followed Barbara into the dark. It was the best and worst workshop ever. People were terrified but loved it. We wrote about what we saw (red guts like spaghetti, ventricles stretched taut as canvas) and did our best not to gag.

Currently, Amelia Gray. I’ve been reading all her books. I have to stop midway through her stories to write. 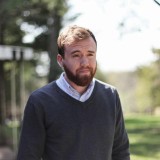