I go to work, read, drink too much, eat, make love. And repeat. Time feels wave-like, or more a whirlpool tub I can’t climb out of. A lazy river.

Sometimes at night you’re here, alive again, suddenly back from the dead. It’s a miracle, people say in that world, that after the funeral that was packed from floor to ceiling, after the hospital bed where I saw you lie after you died without warning, after all of the letters from your students and all of that grieving, you’re not gone after all. We embrace you and make you part of our lives again. But there is a difference. Through our joy, we begin to realize that you watch but don’t see, hear but don’t listen. You sit at your piano, hands on keys, but can’t play. You never speak.

When you return like this, it’s as if I’m in my childhood again, though I remain an adult. I transport back to our old home. Dad, I say, trying to get you to eat something at dinner. We cooked steak, your favorite, I say. You look tired, falling asleep everywhere you go. Dad, what’s wrong? I ask again and again. Still you sit, docile; somehow wise.

The newspaper headline reads “Angolan Plane Fall Man ‘Wanted Better Life.’” It says he fell from the sky onto the middle of an empty street in a remote part of London. Is that a person, is that someone? the people asked, unable to tell for sure from his mangled form. Mangled from the fall, yes; but first from the cramped space he mistakenly thought he could fit himself into. As soon as the plane was in the air, and the wheels began to contract up, stowing away, he must have realized his mistake—maybe he even died right then—crushed easily, as if an ant, beneath the paying customers preparing their headrests for a long journey across the sea.

Say Plane Fall Man would have fallen out over water, over the ocean, say; no one would have known how or when or why he disappeared. He had no family, no identification, no knowledge of which country he was traveling to. What he knew was that he was getting out of Africa. Away from his suffering. Officials didn’t know who he was for days.

If it had been this city, if it had been Chicago, maybe he would have dropped into Lake Michigan. On clear days, pilots present passengers the skyline view, sweeping over the lake before making their way west of the city to the runway. He could have been caught by waves, eliminated by their shifting temperament, and maybe that would have been easier than going back home. No one would have noticed our stowaway in that shining frozen sea. He would never have made the papers.

I stare up at the half-moon on a clear night, walking home. The streets are empty; a plane soars loudly overhead. I think of what it might be like for someone to fall here from the sky, suddenly and with a wet thud. As I walk by a small blue bungalow on the street adjoining mine, an older man steps outside wearing a blue-and-white tank top and shorts, and he pops open a can, loudly, while the door shuts in the sounds of television, clanking dishes, a family. Other than him the street is quiet. He seems startled by me, but he does say hello. I can’t tell if he is upset I have interrupted his moment of peace or if he is glad to see a young woman strolling by. Some people show their emotions all over their face; some don’t.

That night, you return. This time you are lying on the dinner table while we sit around you: Mom, your son, and me. It is our old home again, not my apartment in the city. You refuse to budge from the table. You wear your long nightshirt, the one we used to tease you about because it made you look like such an old man; you refuse to wear anything else after you die. You refuse to budge and we refuse to let you go.

I fly home to Chicago just after Thanksgiving, the holiday when, ten years earlier, you left us abruptly and for good. The flight has left early, and we are to touch down thirty minutes ahead of schedule. But when I finally see the orange-lit layer of clouds below us, reflecting the night-lights from the city, we hang there for a long time. I rest my head against the window. It’s as if we aren’t moving at all, and I begin to notice other lights in the distance on top of the clouds with us, thinking we’ll hit something if we don’t land soon. How can we be so close to them, to the others, and not collide? Dozens of planes, hovering lights, waiting in line to drop their wheels and disembark. Maybe Plane Fall Man remained alive long enough to see such a scene through the cracks: obscured light, a waiting city below. 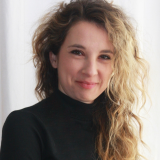 Meredith Boe is a writer and editor living in Chicago. Her creative writing and critique has appeared in World Literature Today, From the Depths, Midwestern Gothic, Chicago Book Review, among others. She’s recently been seen writing poems on a typewriter with Chicago’s poetry-on-demand group, Poems While You Wait. A graduate of DePaul University’s MA in Writing and Publishing program, she now works on contracts for a living.