then
would cells instill
this ellipse?

after Spell of the Sensuous by David Abram

As long as the rain
as long as the reverberation
isn’t verbal a very bare
sound goes down by the
river and washes its vowels off.
Is an offering.

Climb down the overall pattern
where vision snags on something
other than other.
Summon it.

The sum of assertions says something
blue or black or born whirling and entering is
a mirror that goes by many names
none of them
begin with a or end in zenith.

Echo
the myriad things, their own tones and textures.
The sensible world wants words, but the wind
within it isn’t uttering. The bulk of
jagged snags dissipates into uncivilized
oblivion.

Imagine Being Present And Finding Yourself Gone

So present I become dissolute.
No more body
than a leaf is sky.

The only duality, a parting of sound. Ears make my I.

From one side, specificity of motion, a staccato of water finding rock
immovable. Over and over it pulses and crests. A loop of dips, iterations
of soaring and sinking.
To my left.
To my right
an indiscernible roaring, atoms swifting, a sensing. I hear it, am it, heart
cupped. How far seems the chaos of incisions, those injections of
destruction. Here only sings this rushing.

No desire, dreams, words, thoughts, but not without. Not a lacking, or emptying, or longing.
Filling like glacial till, ice pressed. Scoured out, smoothing.

With the rest of my entirety, I enter.
Echo matter.

Body is inaudible, a wild compilation of spruce, cottonwood, argillite, soil, ants, horsetails,
kinglets, currants, dogwood, sedges, lichen, pollen, detritus. No semblance of expectation.
Inspiration and exhalation, itself already done with itself. Between depths nothing is parsed
or sorted into anything but suggestion. No proof of hues. Body spills, flows, fills.

Of earth, a fluidity.
Yet speak nothing, think nothing. Body edgeless, silent, still. 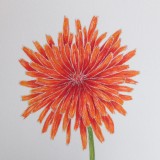 Rebecca Durham is a poet, botanist, and artist. Originally from New England, she now lives in Montana with her daughter and their two cats. She holds a BA in Biology from Colby College and a MS in Botany from Oregon State University. For the last six years she has been researching vascular plants and lichens at the MPG Ranch, a conservation property in western Montana. Rebecca’s writing has appeared in Orion Magazine, Superstition Review, Pilgrimage Magazine, and is forthcoming in the Riverfeet Press Anthology, Meniscus, and Bright Bones: Contemporary Montana Poetry. Her botanical art has been featured at the Montana Natural History Center. She is a MFA candidate in Creative Writing with an emphasis in poetry at the University of Montana. You may find more of her work at rebeccadurham.net.