Our fiction editor Natasha Mieszkowski recently had this exchange with Loan Le, our Issue #29 featured fiction author. Here’s what she had to say about her writing process, choosing a point of view, and the importance of small details and subtext in fiction.

I was listening to a segment on Lore podcast (by Aaron Mahnke) about changelings. True story: a man thought his wife was a changeling, so with the help of neighbors, they tortured the “changeling” in order to get the real woman back. This imagery stayed in my head, and then, for some reason, my mind conjured a situation where a child was watching the woman she knew as her mother burn to death. Dark, I know. Although I started with this scene, it was eventually cut, because the characters and the situation I was writing changed.

Writing from a child’s perspective can be challenging. What drew you to this voice, and what about this story do you think specifically needed to be told from a child’s viewpoint?

This is a hard question. And my answer will be long-winded.

My default perspective is from an adult’s POV, so writing from Callie’s POV was a surprise. I had no clue that the story needed to be told from a child’s POV.

As I began writing I was thinking about the idea of uncommon beliefs—things that are not real to most people. Then I wondered why someone would believe in such things. Then I thought about myself. I believed—and still believe—so strongly in stories, which are made-up (mostly). I think we turn to stories when reality seems a bit unbearable. I had to escape some bullying, so I got lost in stories. Callie is a version of me when I was younger.

I guess, in short, I was more drawn to the voice because I was listening to myself.

The story wasn’t necessarily about the belief in the unreal but more like the reason for someone to love fairytales so much: Callie trusted it; she was comforted by it. All she wanted was to be seen without judgment, to be loved, and to belong.

One of the things that struck me about this story, and impressed me, was that even though it’s from a child’s viewpoint, there are very complicated relationships and disturbing situations being explored. Fairytales themselves can be exceptionally dark. I’d love to hear your thoughts on the nature and preservation of childhood and imagination, especially when a character like Callie has to confront real life monsters. For example, do you think there is a certain point or age at which a child becomes ready to be exposed to darker realities? How should that exposure be handled, either from the child or the adult perspective?

My opinion is mixed when it comes to the preservation of childhood innocence in today’s world. On one hand, I feel like children can be coddled and shuttered from the real world—Disney shows on repeat, things like that. I sometimes feel like someone needs to slap reality on them.

But on the other hand, well, kids are seeing shit like Charlottesville on television and on the Internet! Knowing that they have to see horrible things like that, I want them to stay innocent forever. But innocence isn’t controllable. Nothing is one hundred percent pure. Kids know shit even if their parents and teachers try to feed them bits and pieces.

(This might show you my potential to be an ambivalent mother.)

I think it’s not the end of the world if children are accidentally exposed to dark subject matter. I think it would help if children can at least feel something is wrong. They should pay attention to how their bodies might be reacting and where their thoughts are going. But I think it’s more important to focus on what happens next in the case of accidental exposure. Who will be there for the children if they have questions or need support?

A great deal of mythology and folklore is woven into this story (if those are accurate terms), such as the references to witches, changelings, little people, and of course Gaw Gaw. Did this story grow out of an interest in that subject matter, or did you find the material to be a good metaphor for something already working in your head? I guess this is kind of a which came first question…the chicken or the egg.

I wish I could think and write in metaphors!

But I’d say the former. I’ve definitely been obsessed with the supernatural for a long, long time. I love shows like Supernatural and Medium. I think in another life I would have been like Callie’s father. However, strangely, before this story, I’d never written a story in this “realm.”

I’m revising my short story collection, which is called Look See Wonder. I’m also working on a novel based on one of the collection’s stories. I’d define it as a ghost and a human story.

Despite how hard I try, I tend to write passive characters in my first drafts. One of my mentors, Hollis Seamon, at my low-residency MFA program (Fairfield University), noted that I write a lot of crazy scenarios but the characters’ emotions don’t reflect their circumstances. So this advice made me think more about the characters and their actions and even how small details (settings, gestures, diction) might tell readers a lot about the stake of the characters’ psyches.

As mentioned before, I usually start with a scene. Or a gesture, a sensation or a dialogue exchange—a flash of a story. If that one moment is strong enough, I feel as if I have to build a story around it. On the side, I might follow a loose outline of characters and background info, but I tend to make up my background as the story progresses.

I write the story first and then work on plot. It’s good to have everything out there and then have the ability to move them around like puzzle pieces. I segment scenes with headings like: Character does this to do that—just so I know what’s “supposed to” happen.

Revision is my favorite part. I view the process quite literally—re-vision. I remove myself from the story first. I leave my desk and emerge into the world (out of the darkness, ha!). I don’t exactly participate; I find myself observing more and jotting down things by hand. I store all sorts of information that can be useful later. I turn to books on writing to refresh my mind (Charles Baxter’s The Art of Subtext is my go-to!). I trick my brain into forgetting whatever story I’d written. Then return to it with a fresh pair of eyes. I revise the big picture first—a to b to c. I ask myself what the central dramatic question is, what I was taught as “the beating heart of a story.” I force myself to linger scene to scene, because these scenes answer the question—they connect directly to that question. They’re the veins of the story. I might glance back at my written-in-sand outline, but most of the time the outline no longer applies.

Overall, I really try to look at both the emotions and the logic in my pieces.

I’d just watched the movie “Balto” in my fifth-grade class, so my first story was about a talking dog released into the wilderness. Then I picked up a copy of Jack London’s The Call of the Wild and decided that London stole my story. So, I stopped writing it.

I loved the Boxcar Children series!

Again, I am a fan of Charles Baxter’s writing on craft. The Art of Subtext is just a fantastic book about the invisible threads throughout fiction—things unsaid that really matter. I love Jennifer Egan and her focus on our loneliness and the lengths we’ll go to feel a sense of belonging. Many of my stories deal with loneliness, too. Denis Johnson’s writing is electric—Jesus’ Son has such a strong voice throughout, and I can only hope to emulate his strength in voice. Viet Thanh Nguyen showed me how it can be easy and hard writing about my own culture.

Great question. Gaw Gaw was written for a workshop at my MFA program, and I owe a lot to my fellow classmates and teacher for their sensible and honest feedback. They had a good list of praise and criticism—of the latter, their comments were specific and shown with examples. (As opposed to comments like “I don’t like this character.”) They’d say things like, “This doesn’t sound like something Callie would say. She’s smart but would she really know this word?” Or, “Her reaction is missing here. Why?” I saw many blind spots that I wouldn’t have seen without their help. So thank you, Jess, Tim, Beth, Melanie, Kristie, Sam, and—most of all—Rachel Basch!

End of summer, beginning of fall (now!). Leaves rustling along the sidewalk. Doors open to let in the breeze. Iced coffee that stays cold for a long time. 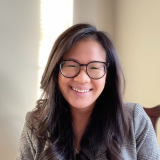 ​Loan Le is a fiction writer living in Brooklyn, New York. She works as an editorial assistant at Simon & Schuster’s Atria Books imprint. In July 2017, she will graduate with an MFA in fiction writing from Fairfield University, also her alma mater. She is at work on a short story collection called Look See Wonder. You can follow her Twitter account @loanloan or her blog writerloanle.me where she writes about books, publishing, and fiction writing.