Art editor Jennifer duToit-Barrett recently had this exchange with Issue #40 featured artist Justin Hamm. Here’s what Justin had to say about his photographic style, the landscape of the Midwest, and how his art connects to the past.

Your photographs seem to capture gone moments in time. What drives you to photograph objects and landscapes in decay?

Old things give off an inspirational magic, and I’m addicted to it. I think about who used to live in this old house or who once drove that rusted-out tractor, who used to walk through the factory gates with a lunch pail in one hand and a cigarette in the other. It’s an invitation to the creative writer who lives inside my head to invent stories.

There was also an element of preservation, initially. I wanted to capture what’s left of this part of America before it disappears completely. Bob Dylan says the purpose of art is to stop time. But like Thor’s wrestling match with old age, every attempt to stop time is eventually futile. Not to get too meta here, but now I tend to see my photographs as quixotic in a way; they document the futility in trying to freeze time. Even if there is harsh beauty in the pictures, there is also an awareness that time is constantly passing.

Do your images somehow connect the present to the past, or are we already too far removed?

In America, we’re never too far removed from our past. We have all these stubborn, rusting artifacts of our history scattered over our metaphorical front yard. That can be deeply inspiring–the past contains much for us to admire and emulate–but it can be limiting at the same time. Some of these artifacts are beautiful and heartbreaking in their refusal to fully give over to ruin, small reminders of how well things were once built. Others are more sinister than their romantic facade might suggest, holdovers from the shameful aspects of American history that we may never move beyond.

As to how that relates to my pictures: I’m a big fan of songwriters who borrow from older styles or vernaculars to comment on the present. I hope I do something like that with my photographs. I think the best of my pictures contain a level of metaphor, but when a person hears a song, the way that song actually lands has a lot—maybe even more—to do with the listener.

An image like “Crooked Jesus, Ozarks,” for example, says plenty to me about the world we live in now. But not everyone will read that photograph the same way, and I wouldn’t want them to. My photos aren’t op/ed pieces.

I am particularly drawn to “Chelsea Hotel” and “In Ha Ha Tonka.” Both of these works capture a place, which a viewer can assume was once active. When seeking places or objects to photograph, are you in search of a history, real or otherwise?

I’m after anything that implies a human element but allows viewers to provide the ghosts themselves. I love the real history of place, and I try to collect some of it when I can, but I’m far from a documentarian. I’ve evolved away from that. Now, it doesn’t matter to me so much that a viewer imagines the real family who lived on a certain farm. I want there to be some mystery, some freedom for a viewer to invent. Ultimately, a photograph will have more life that way.

You are also a poet. Do your photographs inform/influence your written work, or vice versa?

They definitely influence one another. At first, the photographs were just meant to collect Midwestern imagery so that I could describe it more accurately in poems. Over time, as I grew more confident, I started to think of the pictures as poems in their own right, and that’s how I thought of them when I sequenced my last book, American Ephemeral, which mixes in black and white photographs. The two mediums have become so interwoven I don’t differentiate between them in my head. They come from the same place and are part of the same vision. And they share the same goal: to present an image, idea, or story that moves a viewer/reader in a way that lasts.

What drew you to photography over other artist media? Have you always shot digital?

The truth is, I’m drawn to just about every medium. I’m crazy about music, but I’m a lousy musician. I’m awed by great paintings, but I can barely stay within the lines in a coloring book. This summer I fooled around with digital collage-making with mixed results. Maybe I could get better at these skills, but photography allows me to get out and interact with the Midwestern landscape directly, which I love, and that’s helped me stick to with it through the early growing pains of learning the camera and developing a style.

I’ve always shot digital for the purpose of sharing and reproducing, but I have a few vintage cameras, and I used to occasionally shoot film for the sheer fun of it. IA close friend of mine is a fabulous photographer who owns a variety of antique cameras. I’ve spent time shooting with him and assisting in his darkroom in the past. It gives me a great deal of respect for those processes.

Tell us about one of your photography adventures… driving through back-roads… and what tempted you to stop, point, and shoot.

A couple of years ago my old man came down from Illinois to stay over spring break, and he and I went south into the Ozarks for a day of photography. He’s always been the biggest supporter of my photography. For a long time, I felt apprehensive about trying to do anything beyond sharing it with people on social media, but he insisted it had value beyond that.

Anyway, that day, we drove through small towns nestled in the remains of Proterozoic-era mountains, listening to Carter family tunes and arguing over how to solve the world’s injustices. We stopped to shoot a few barns and an old church here and there, ate lunch at a hole-in-the-wall diner with a tasty club sandwich. The old man has been a carpenter for over forty years, so he talked about the construction style of these old buildings, the kind of information I used to hate as a kid but that I soak up now.

For a while it rained, and dad reminded me repeatedly that we could hydroplane at 55 miles per hour. I drove about 53 to appease him. When it finally cleared up, we detoured into Ha Ha Tonka State Park for a while. The lighting had been a disappointment all day; the overcast sky left all my pictures flat and uninteresting. But when we came upon the old stone water tower, part of the blufftop castle grounds that burned about a hundred years ago, the clouds behind had turned dark and moody. We both pointed at the same time: there’s the shot. Sometimes it’s less about creating a photograph than just being ready at the right time and letting the Midwest express itself.

The final picture turned out stark and lonely, which is ironic, because when I look at it, I remember a day of joy, laughter, and fun. 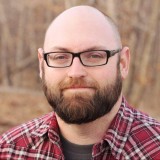 Justin Hamm’s latest book is a collection of photographs, Midwestern., forthcoming from Spartan Press. He is also the author of two full-length books of poems, American Ephemeral and Lessons in Ruin, and two poetry chapbooks. Justin’s photographs have earned a twelve-page, full-color feature in San Pedro River Review and the Inkslinger Award from Buffalo Almanack. His first solo exhibition took place in the fall of 2017 in Columbia, Missouri; further exhibitions are scheduled for the Mississippi River Gallery in Hannibal, Missouri, and Normal Public Library in Normal, Illinois.