Fiction co-editor Kathrin Hutson recently had this exchange with Issue #45 featured fiction author Jacqueline Vogtman. Here’s what Jacqueline had to say about balancing ambiguity and clarity when crafting a story, how she chooses a point of view, what she’s working on now, and more…

What inspired you to write “Girl Country”?

The initial seed of the story was planted in a dream I had several years ago, not too long after the birth of my daughter—I must have had breast milk on the brain. I wrote it down in my dream journal with the intent of turning it into a story, but it wasn’t until last year that I was able to actually sit down and flesh it out. In between the initial dream and the writing of the story, a lot of things happened—I was transformed as I grew into a mother, but also the country got a new president and there seemed to be a resurgence of misogyny in certain areas and there were all these news stories about children in cages. So while the story initially grew out of a dreamscape, the actual writing of the story was very much informed, even on a subconscious level, by the events happening in this country and the danger that women (and especially marginalized women) face. But all of this is kind of over-analyzing my story after the fact—I think at the heart of it, it grew out of fear and love, the two driving emotions of parenthood.

Usually I am very, very bad at titles, and usually I don’t come up with one until after I’ve written at least a full draft. However, in this case the title came pretty easily and quickly. It just kind of popped into my head. But typically after I write a draft, I’ll brainstorm a whole list of titles, and maybe out of that list there’s one that’s somewhat decent or at least not terrible. When I was in grad school, I remember a time when the whole workshop group was helping me brainstorm titles, with our professor, the late Wendell Mayo, helping as well. His title suggestions were always hilarious and super punny, and it’s one of the many things I’ll miss about him.

For some reason—maybe because it started as a dream and had a few years to percolate inside me —this story came to me so naturally. I wrote it over a few days’ time, and most of it remained intact throughout the revision process. As I wrote my way toward the ending, this was one of those rare cases where I was pretty sure where I was going. I knew that the characters had to make their way back to the “breastmilk factory,” because Noah had to unravel the mystery of where this child came from. And the final action of the woman offering her breast to Noah to (possibly) heal him was also something that just “flowed” naturally (no pun intended). I suppose I was inspired by the end of Grapes of Wrath, which was a huge influence on me in high school, and though I haven’t read it in years, the power of that ending has stayed with me.

How do you balance ambiguity and clarity of story? How do you decide how much to give away and why?

This is a tough thing to do, and something I’m definitely still working on. Sometimes in an early draft I’m still discovering what the story is about, so it’s hard to really figure out what to give away. But once the draft is written is when I can go back and start to balance things out, thinking of it from a reader’s perspective. I used to front load a lot of information, trying to hook the reader in, but as I’ve grown as a writer I think I’ve become more comfortable with mystery. So much of writing (and any art) is mysterious, so I think giving everything away too soon is doing a disservice to the essential mystery of art.

Why did you decide to write from Noah’s point of view? How do you typically choose point of view in your stories?

I really like writing in close third, because you get the perspective of a character but also the slight distance that you would not get with first person. In this case, I’m not sure I “decided” to write from Noah’s perspective; it’s just how the story came to me. This story is from my (still unpublished) collection, and most of the other stories are written from a female point of view, so this was a slight departure for me. I think choosing who tells the story can be an important political choice, even if there is nothing “political” about the story at all.

We found the emotion behind your characters’ relationship—specifically a man who’d lost both his wife and his daughter now caring for a girl almost his daughter’s age—particularly compelling. What personal experiences, if any, did you draw from to solidify this growing emotional bond?

I definitely drew from my experience as a mother. I think becoming a parent is one of the most heart-wrenching, poignant, painful, beautiful, transforming, and complicated events in a person’s life. There’s this sense of loss from the moment the child is born. The sense that time is constantly passing you by, the child is never the same person she once was, constantly changing, constantly transforming. Parenting is a practice in loss, in transience. I think this is especially true for mothers. We begin with the child inside us, then suddenly the child is outside, and growing out and away from us constantly. Yet there’s always this umbilical connection that binds us. So, anyway, this is just to say that Noah—though a fictional man in the near-future, a farmer with nothing much in common with me—is very much a reflection of my own feelings and fears about parenting, the love and attendant loss that accompanies it.

I definitely find myself returning time and again to the female experience, in various forms. Many of my stories also tend to comment somewhat on history, the past, and its connections to the present. I think when I submitted my thesis at the end of grad school I gave it the epigraph from Faulkner: “The past isn’t dead; it is not even past.” “Girl Country” departs from this theme somewhat, as it takes place in the future, but even in this story there’s the sense of Noah’s personal history haunting him—the deaths of his wife and child.

This is a tough one. I mean, I look at literature as a way of increasing empathy, so I would hope that this story could generate empathy: for a poor small farmer like Noah, for a lost girl, for the women who were kidnapped and used for their bodies. I guess I would also hope it could showcase the power of women to heal and save and act as heroes in their own (and even in others’) stories.

Well, I wish I could say I was working in a sustained way, every day, on a project. However, the reality of my life with work and motherhood makes that impossible. So lately I’ve been doing what I usually do during the semesters: here and there writing a poem, writing notes for various stories that will hopefully be completed over winter break. I just put finishing touches on my short story collection, and I also have a novel I’ve been working on for many years, and am just returning to now, hoping to revise it one last time and finally be done with it. This novel is about a lower-middle class family, covering three years in the family’s life: 1999 (Y2K), 2001 (9/11), and 2005 (Hurricane Katrina).

I got my MFA from Bowling Green State University, and it was probably the best decision I ever made. My workshop mates and professors were thoughtful, creative, and passionate. It’s hard to think of a best experience, because there were so many. We were such a small group, and we all really grew to know each other’s work so well. Many of us were writing magical realism, so it was fun to see what my peers would come up with each week. I suppose the only bad experience I can think of is when we had a visiting professor—ultimately he just wasn’t a good fit for our group, I think, but he also carried with him elements of pomposity and misogyny and lots of scarf-wearing. Of course, we were lucky this was only for one semester and our regular professors at BGSU were so well-attuned to what we were doing, and treated our work with so much respect and understanding. 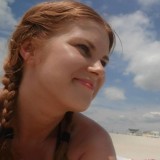 Jacqueline Vogtman's work has appeared in Atticus Review, Copper Nickel, Emerson Review, Gargoyle, Smokelong Quarterly, and other journals. She received her MFA from Bowling Green State University and currently teaches at Mercer County Community College in New Jersey, where she lives with her husband, daughter, and dog.