The ocean swallowed a father.
My father’s father whole. His father ate
too many hearts of chicken & women. He ate
his children. My father, one of them.
By the time my mother & father walked
by the same tree, he was born again
into new skins. My father is multilingual.
He knows the cadence of clouds
after murmuration. The language:
Algebra equations, American
English, rough hands, Haitian Creole,
turned backs & laughter. He taught me
how to eat the sun & my own tongue.

How to eat the sun & my own tongue,
turned backs & laughter. He taught me
English, rough hands, Haitian Creole,
Algebra equations, American
after murmuration. The language:
he knows the cadence of clouds
into new skins. My father is multilingual.
By the same tree, he was born again
by the time my mother & father met
his children. My father, one of them.
Too many hearts of chicken & women. He ate
my father’s father whole. His father ate
the ocean & swallowed a father.

Lord, give Ma my knees
& maybe she will run
from her husband & his
eating away at her flesh.
No matter the season or
holy day. Give the knees
voice to remind her
of the worth she stuffed
in the folds of forgotten
favorite dresses. Tell her
she must not die in a festival
of red could have beens. If
I could leave my boyfriend
she could leave Daddy, too.
Tell her she can be a new
kind of ocean. Remind her
that shedding is natural,
even after thirty years
married. Some things
just need to burn.

1. floor wailing louder under her feet each time she runs

4. her face crashing through rain of his fist

6. the night before everything unfamiliar became a mirror

7. dead women of her leave ashes in her lungs

8. the most whole he’ll ever feel as a man in love

until he left me for

Aubade After the Storm

Wounded rooster sings of morning
like it wants to forget the night,

invites my eyes to open like curtains.
Sunlight breaks the windowpane,

reminder that my favorite season is still
here. Mouth of the beach awaits me.

I wake & try to wash what he left of me
in ruins. Towel-press droplets into my skin

like gauze after a drawing of blood.
Grab a blue dress from the hanger

& search for peace in the cotton folds.
I walk down an empty road & glance

at a man’s beard the color of a pigeon’s
back. He smiles at me like I am kin.

I smile back though we look nothing alike.
Wind propels my cypress legs forward,

embraces knees that want nothing more
than to pummel the ground. I arrive

at the beach where armies of waves
cut into sand like Ma split fresh bread.

Hairs on my arms stand in longing
for home in my former lover’s arms,

despite beating winds of his voice & hands.
They say missing an abuser is normal.

Yet one day you’ll return to your reflection
with sky of you more often blue than barren. 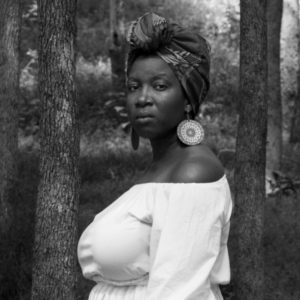 Nadia Alexis is a poet, photographer, and organizer born in Harlem, New York City to Haitian immigrants. Her poetry has been published in The American Poetry Journal, Texas Review, Tinderbox Poetry Journal, and elsewhere. Her photography has been published in fields magazine, TORCH Journal, and MFON: Women Photographers of the African Diaspora. She has received poetry fellowships from the Callaloo Creative Writing Workshop and The Watering Hole, as well as a visual arts fellowship from the The Carr Center Independent Scholars Fellowship program. Her photographs have been shown in several exhibitions in the U.S. and Cuba. She is currently a creative writing Ph.D. student at the University of Mississippi where she also earned her MFA.