Managing editor Erin Post recently had this exchange with Issue #46 featured poet Lisa Beech Hartz. Here’s what Lisa had to say about editing a manuscript, her dual focus on art and writing, her mission to bring poetry to underserved communities, and more.

Let’s start with a focus on ekphrastic poetry. Why are you drawn to this form?

I suppose this is because I would have loved to have been a visual artist. To be capable of taking what I see, the way I see it, and transferring it to a canvas. My son just told me there’s a moment when we cross a nearby bridge when I point to the river and say, apparently every single time: Look, look, are you looking? I think what I’m trying to say is: Do you see what I see? A painter can show you, can really put it out there. Also, the Western Branch of the Elizabeth River is beautiful every day, no matter the weather. I’ve always enjoyed research, digging up the story. Finding out that Edouard Vuillard’s mother was a dressmaker, which is why the textiles in his work are everywhere and so evocative. Or that Van Gogh was a missionary – and that’s not a metaphor. Discovering that Mary Cassatt was nearly blind toward the end of her life and that Renoir’s son taped his brush into his hand every day. These were real people who gave us this feast of images we all share.

Why did you choose to focus on Jackson Pollock and Lee Krasner for this series of poems?

One of the first things I noticed about Lee Krasner’s work is that you can’t turn a corner in a museum and spot a Krasner. Unless you spend five years writing about her, anyway. You can spot a Pollock from a mile away. A Rothko. Joan Mitchell. But not Krasner. Because she was brave enough to never brand herself. She let the work be what it needed to be. I think that’s remarkable. I wanted to understand why this woman, who was strong enough to let herself be entirely herself – and this is in the 1940’s — would devote her life to a mess like Jackson Pollock, the man. It turns out there was so much more to the story than that. It grew into an entire manuscript.

Every poem in this series stands alone in that each tells a self-contained story with nuance and skill. The poems also communicate with each other, and taken together, tell a different story. We’d love to learn more about your process when it comes to crafting one poem versus a series of poems.

Thanks for that! It’s been so long since I’ve written a poem that wasn’t intended to be part of a larger project. I’ve found I love having something to return to every writing day. I’m in the early days of a new project right now. This one involves lots of historical research up front, hoping the writing will come. It’s a little scary, actually. When I’m immersed in a project, I can ask myself at the end of every writing session: What else do you need to know? Have you answered that question? And I have that to get me started at my next opportunity.

We are so happy to feature you once again in Mud Season Review! Since we last spoke you have published a poetry collection, The Goldfish Window, in 2018. What did you learn? What advice or nuggets of wisdom can you share with other poets looking to publish their first collection?

Five poems from the collection were published first in Mud Season! That was such a boost at a critical time. I’m so grateful. A couple of nuggets: Basic — proofread your manuscript to death. I had one contest editorial assistant nudge me for typos and allow me to resubmit but wow, how many times had I submitted that mess and just been put immediately in the no pile? Research the contest judge’s work. You want to admire the writer who chooses you. In my case, I didn’t actually win the contest but the publisher took in enough submission dollars that they offered to publish me, too. So that was kind of amazing. I just checked Duotrope, and it says I submitted that manuscript for over two years before it got picked up, so don’t give up! Keep writing new stuff while your book does the rounds. It helps with the rejections to be moving in a new direction. Just before my book came out, I read a piece somewhere on the internet that said to writers: Be ready. No one will read your book. Not your mother. No one. That is true. So don’t sweat it. Just keep sending it out.

You’re currently working on a manuscript – in which the poems we feature are slated to appear. How do you approach writing and editing a larger body of work? What has surprised you? What has been helpful?

I finished the Lee Krasner manuscript, which I’m calling Retrospective, and it’s doing the rounds now. Editing that monster was crazy-making. I would have sudden epiphanies and try cramming new bits and pieces in. I listened to way too many people’s opinions and lost track of what I wanted the thing to be. My husband finally said, You could just do what you wanted. Oh, yeah, I forgot. So I took out everything that was in there to please my workshop and my writing group and kept in what was there for me – and for Lee Krasner. I’m all for workshops and groups, but in the end I needed to write the book I wanted to read.

You’ve long been committed to bringing creative writing workshops and programs to underserved communities. Why is this work important? What motivates you?

I started Seven Cities Writers Project in 2014 after ten years of directing a community writing center which was, and still is, thriving. I wanted to take that template to people who couldn’t, or for whatever reason wouldn’t come to our facility. I was motivated in part by my husband’s work as a legal aid attorney – he’s an advocate for people living in poverty. I wanted to be someone who is actually doing something to better the lives of others rather than just complaining about the problem. And writing has been such a source of solace and identity and self-expression for me all my life. I had to share. My first gig was working with men incarcerated in a city jail. And differences between us fell away once they started writing to my prompts and sharing what they wrote. I guide workshops in jail for both men and women now. I’m also guiding a memoir workshop at an LGBT center, and have guided workshops for survivors of the Jim Crow era. Each of these has been such a gift to me. And the most satisfying experiences of my professional life. To be given the opportunity to observe the transformative power of creative expression is magic.

Talk a little about the Seven Cities Writers Project. What are some current initiatives?

Seven Cities Writers Project is a non-profit devoted to giving voice to the voiceless. We’re expanding our workshops into a second city jail in the new year. We have a couple of wish list workshops – one for parents and caregivers of children with special needs; and one for the spouses, partners and adult children of current and veteran military members. So much depends on funding, and how many hours there are in a day.

We also always love to hear a little bit about writers and other artists who are currently influencing you. What have you been reading/watching/viewing/listening to?

I try to have a novel, a collection of poetry and a work of non-fiction going at all times. Right now, I’m in love with Kelly Forsythe’s collection, Perennial, which explores the trauma of Columbine in ways that take my breath away. Kevin Young once told me I need to get more jiggy with it. I’m using Kelly Forsythe as my guide. I’m also increasingly obsessed with marriage – I’m in a longtime, blissfully happy one, which remains the core mystery of my life. I’m sure that’s what drew me to Lee Krasner – her marriage was work. I’m reading Stephanie Coontz’s Marriage, a History, and also Jennifer Potter’s fascinating work, The Jamestown Brides. I love English novels by women from the 1950’s and 60’s. I’m reading The Tortoise and the Hare by Elizabeth Jenkins, which takes place in those stifling years before the arrival of feminism. You can feel it coming like a train in the distance. And I bought myself the new Phaidon, Great Women Artists, for Christmas! Can hardly wait! 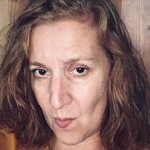