Fiction co-editor Grace Safford recently had this exchange with Issue #47 featured fiction writer Shane Inman. Here’s what Shane had to say about his inspiration for “Watchtower,” how his background in theater informs his writing, what he’s working on now, and more.

To begin, can you tell us what inspired you to write “Watchtower”?

A lot of my pieces start with just a single image, and this was one of them. A few years ago I happened across a melancholy piano piece entitled “The Watchtower,” with album art depicting a snow-dusted platform around a tree. Something about the image really struck me, so I made a note of it and tucked it away for two years. When I finally came back to it, I found that the ideas at the heart of the story had just sort of quietly attached themselves to that picture while I wasn’t looking. For much of the story there is a question/heavy consideration about what the expression on Ethan’s face was before he went through the ice.

Why do you think this moment is so important to the characters involved in your story?

I think in most cases of suicide, one of the first questions those close to the victim ask themselves is: “Were there signs?” And of course, the question buried within that question is: “Could I have stopped them?” It’s the sort of question that, because it’s so deeply rooted in guilt, is almost impossible to silence. The moment on the ice is something of a crystallization of that question—a key point where something could have been spotted, or simply wasn’t there at all.

I knew going into the story that I wanted echoes of childhood to be a significant part of the narrative, and I think the idea of a sort of “childhood fortress” is a powerful one. It’s a space that, when we’re small, feels impenetrable, secure, safe. But of course it isn’t any of those things. The idea of revisiting such a place as an adult with a broader and less charitable understanding of the world is one that really interests me.

Your main character, Ty, tries hard to leave behind the town he grew up in. In a rather poignant moment, he asks himself: “Do children always learn to hate the place that raised them? They must.” I think many people may have had a thought like that at some point in their lives. Now older, do you think Ty might be forming a different opinion about his home? Why?

I do think his opinion is shifting—not necessarily to a more positive view of his hometown, but at least a more nuanced one. Even returning under the circumstances of the story, he’s moving from a world of great uncertainty to one of almost stifling familiarity. He knows the landscape, the people, his parents, even if he realizes it’s all changing under the surface. In some ways he can still be a child here, and make himself believe in the protective power of this place as he once did the watchtower.

Much of this story is about memories—as are a good portion of our own lives. A line that really struck me in your piece was: “I felt suddenly that I should have sat elsewhere, taken my father’s chair maybe, rearranged the space so it didn’t fit so cleanly over my well-trodden memories.” Do you think story has the power to help us sort through and understand well-trodden memories? How so?

I think story definitely has this power, in part because our memories are so unreliable. Our memories are constantly being altered or lost and yet we often fall into the trap of assuming them to be immutable truth. It’s my hope, at least, that story provides a secondary avenue to approach memories we might believe are set in stone, and thereby gives us a chance to see and understand them differently.

What do you hope your readers think about after they finish reading “Watchtower”?

This is a tough one, because I’m hesitant to prescribe any particular thing to readers who come to the story with all sorts of backgrounds and life experiences. I think a lot of the heavier themes here are things with which most of us have experience, but all of those experiences are distinct and unique, so seeing an echo of them in “Watchtower” is hopefully going to evoke something different from each reader.

In your bio you mention you’re a lover of writing and theatre. Has your work with theatre and directing influenced your fiction writing in any way?

Oh, absolutely. Directing in particular is great because not only does it make you think really deeply about character motivation, emotional state, etc., but it also gives you the opportunity to work one-on-one with actors who are thinking just as deeply about these things but often coming at them from a completely different angle. Having the opportunity to hear and understand these different perspectives is a powerful exercise for anyone trying to craft truly multi-faceted characters.

One that comes to mind immediately was introduced to me recently by an actor friend of mine: How to Disappear Completely and Never Be Found, by Fin Kennedy. I’m fascinated with the strange, violent, fear-filled place a lot of men occupy in our society—this whirlwind of self-destruction and lashing out at the world—and How to Disappear is one of the most intriguing and tragic explorations of this I’ve read in a long time. It’s unusual, frantic, and well worth reading.

In your bio you also mention traveling extensively and volunteering in exchange for room and board. Have the places you’ve been and the people you’ve met helped to inspire your writing?

They definitely have, though never in as direct a way as I expect. I find I rarely write directly about the people or places until they’ve had sufficient time to percolate in the back of my mind. Often, the new environment simply jars me out of whatever creative rut I’ve found myself in, and propels me to work on years-old ideas that have been waiting for their moment.

It’s the start of 2020. Do you have writing goals or resolutions for this year?

I’m definitely hoping this is the year I enroll in an MFA program. I put it off for a few years to work and save money, but I feel like this is definitely the time to go all in on pursuing my writing. I’m still young and mobile, so why not?

And lastly, what are you working on now?

I have about a dozen short pieces from my last trip badly in need of revision, but my focus right now is on tightening up a quiet story about a young boy who finds comfort and companionship in the presence of a very large fish tank. 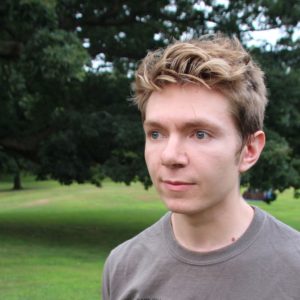 Shane is a freelance tour writer born and raised in the smallest state in the U.S. He gave up a budding career as a technical writer to focus on his creative work, which includes both writing and theatre. More comfortable behind the lights than in front of them, he has directed several theatrical performances, including Will Eno’s The Realistic Joneses and an original adaptation of Apocalypse Now. When he has the time and resources, he travels domestically and abroad, performing volunteer work in exchange for room and board. He has lived on an animal sanctuary and in a monastery, among other odd places, but wherever he strays his home will always be the New England winter and the city of Providence, Rhode Island.