Art editor Kristin LaFollette recently had this exchange with Issue #48 featured artist John Chang. Here’s what John had to say about the spiritual power of calligraphy, navigating American and Chinese culture through art, the importance of mentors, and more.

This series, which is almost entirely in black and white, is called Snorkel Blue. How do you see the title reflected in the artwork?

The original ideal was from my collector who came up with “Snorkel Blue.” He previously collected one of my pieces, “Red Age,” and wanted me to use another color instead of red. The “Red Age” I created reminded me of the Cultural Revolution that erupted in the mid-1960s. It completely destroyed Chinese traditional culture. Mao Zedong dreamed of building up a socialist utopia designed by him. Throughout the Cultural Revolution, he crushed artists’ volition of design and creation. There would be recourse to newspapers, handbills, and posters using big characters (handwritten, wall-mounted posters using large-sized Chinese characters) as a means of protest, propaganda, and popular communication. So the red associated with war, danger, and power. It is emotionally connected to my personal background. So I came up with the blue color …

There are two reasons that I choose blue. One is that Pantone announced another year of blue, and secondly blue represents sky, sea, and is associated with open spaces, freedom, and peace. In “Red Age” I tried to capture the corner of the real world; in “Snorkel Blue” I focused on the current condition from a global level.  I was trained in Chinese ink painting and calligraphy when I was a child. Most of them are in black and white. Because black and white (for me) are not colors, it’s about life and death, day and night, negative and positive energy that we have to deal with in our everyday life. I think that the blue color achieves a new level of awareness – the higher consciousness that is also the goal of new life. The life we all dream with trust, sincerity, and heaven…

Your descriptions note that each work in this series uses newspaper as a material, although it’s not immediately clear where or how newspaper is incorporated. Can you talk a bit about your choice to use newspaper and how you utilize it in your work?

I collect newspaper in many languages. It’s information about cities, countries, and I cut them and I transfer the actual materials into pictorial language. I am referring to the word “language” in many ways. Chinese and English (my languages), hand writing and fine art, calligraphy and painting, and the process of “finding” versus creating one’s history day by day. Many languages do not create chaos in my life but richness. In it I was deconstructing and reconsidering the boundaries between the personal and the political, between ideas of what is “American” and what is “Chinese” and between high culture, low culture, and ancient culture. As I did this, I cut things out, brought them home, and painted the same four canvases over and over. The canvases are roughly the size and proportions as the outdoor billboards that I work on during the day, and of the propaganda posters that I saw as a boy in China. I have documented every day’s painting process, archived the photos, the newspapers, the post-production materials and the deconstruction of the Chinese characters. Because I am documenting my process, viewers will be able to observe the daily changes in the works.

Your artist statement and the poetic nature of it intrigue me. You say, “In [your] new works, people come and go; yet no one is seen. The migrators leave their shadows in the air and their marks on the sidewalks. Their words and echoes float through storms of sharp, black fragments flying in all directions.” What do you mean by this? How does this come through in your work?

I was born and raised in Shanghai. By the 1980s, Deng Xiaoping initiated a more open-door policy, but I still had a deep desire to experience America and Western culture. Immigrating to Boston to study art in graduate school, I discovered a more complex society than I had imagined. Longing for a democratic system, I wasn’t prepared for the magnitude of consumption both promoted and practiced. The great chasm between communist China and capitalist America was quite a shock and heightened my awareness of self. Belonging to both worlds and to neither, I recognized the social construction of cultural codes and their impact on identity.

Continuing from the previous question, a review on your website (“NOT SO BLACK AND WHITE”) talks about how your paintings include “Chinese calligraphy” that “are recognizable yet undecipherable as written language.” Since the characters are “recognizable yet undecipherable,” what meaning should viewers take from the work? What are you hoping to convey through incorporating these characters?

Calligraphy expresses the shared space of the personal and the political. Chinese students must devote many years to memorizing several thousand characters. Each character must be written flawlessly and must be both neat and pleasing to the eye, and such rote exercises condition one to submit to authority. In the public square and all walls everywhere, big calligraphic characters were a constant reminder of a collective voice, and so people discounted the empty rhetoric of the official media. Yet in classical Chinese, the script, or shu, is so sacred that it is believed to be capable of affecting change in the natural order of things. By invoking calligraphic forms, I am commenting on the distortion of language, but I am also reclaiming the energy of the written word. Tapping into my ancestral roots, I also use pigments for their symbolic power. For example, black and white is the colors of most ink painting but also represent yin and yang; red and yellow represent happiness, wealth, and health. I consider myself a “spiritual escapist.” The characters function as visual elements rather than lexicography. This means that even an audience that can’t read Chinese can take part in the language of the module, the mark, the gesture, the performance, and the design. The “picture” that results now reads like as essential product of the effort to communicate across time/space/culture, and not just a painterly allusion to it.

You talked a bit about studying with artists like Xu Bing and Judith Barry. How did their mentorship shape you as an artist?

Work hard and never stop. They encouraged me to see the breadth in contemporary art, break the boundaries and push myself out my comfort zone. I work 70 plus hours. Commercial by day and painter by night. Every day I work hard to remember who I am. Today I remember that I’ve made it this far in life because of the sacrifices, generosity, and extreme kindness of others. The diversity of Los Angeles has always been one of its greatest strengths for artists who came from somewhere to find their home.

John is an engaged artist, working in both the fine and commercial art sectors. He has well-developed visual sense and strong understanding of contemporary visual Culture. I think that his work in the field of advertising is actually an asset to his artistic production as it puts him more directly in touch with contemporary culture, with the changes that are taking place on the global level, and because it makes it less likely that he will be constricted by the narrowly defined theory-based approach.
-Xu Bing

While this series was created with acrylic and newspaper on wood panels, your website shows some beautiful works that are 3-D and utilize layering and hanging the various pieces of the installations. What is your preferred form/materials? How do you determine which form/materials an installation will take/use?

I love to work on my 3-D projects because I use a lot of leftover commercial products, like PVC, used old books, plex glasses and cardboard boxes…and send them to craft shop to recreate them as what I need. It’s all depending on the budget, as it costs more to use recycle material than new material. But it means a lot to me and to the world we all live and share.

What creative projects are you currently working on?

I am preparing work for my upcoming solo show at Goggle Works Center for the Arts. And a summer one or two-person show at Mill Contemporary. Also, I am going to make some new work by using cardboard boxes, shipping boxes that we all so many of from our online shopping. They will be showing at Massillon Museum next year. 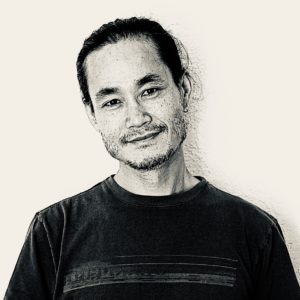 Born and raised in Shanghai, China, John Chang is an artist based in Southern California. John’s works have been widely exhibited, including at the Alexander Brest Museum at Jacksonville University, Fla., 621 gallery, Tallahassee, Fla., and Fresh Paint Art Gallery, Culver City, Calif. Chang’s work has been featured in diverse publications such as Pasadena Star News, KTLA, and Art In America, Art Ltd. His work is collected by Restoration Hardware, Inc., DAE Advertising, Inc. San Francisco, the National Taiwan Museum of Fine Art, and many private art collectors around world. John Chang has an MFA in Visual Art from College of Art and Design at Lesley University, and a B.A. from the School of Art and Design, Shanghai Institute of Technology Shanghai, China. He also studied with the well known artists Xu Bing and Judith Barry.