Q: “False Jasmine” and “Amanita” both take their images from botany.  Please share your process in writing them. Did you begin with the plant or an idea? Did the language come from direct observation of the natural world, or from other sources?

A: . Having absolutely no green thumb, I did a lot of research! The language does derive from actual properties—bees can really poison a hive with the pollen of gelsemium sempervirens (false jasmine) and the membrane at the base of the amanita mushroom is really called the volva—but the poems are metaphoric explorations of human behavior. I started writing them while I was editing my last collection (Evelyn As), which drew some of its imagery from flowers. In the late Victorian era, a common way to communicate relationship status was through the symbolic associations of flowers (the red rose meant passionate love, while the yellow meant jealousy). Researching the meaning of flowers, I discovered that despite their beauty, several types were poisonous, which I found an interesting juxtaposition. Then, I started wondering how I might use the language of flowers as a code to talk about toxic people and environments in the here and now.

“Really, most people are gaslit, poisoned

bit by bit, unraveled by casual cruelty, rather

than by explosive acts.”

Q: Although these poems reflect toxicity in relationships, they also stalk the edge of violence.  How do you think about and navigate this line of explicit vs. implicit in your poetry?


A: This may reflect my own personal push and pull with outward violence. In the past, I’ve been the target of physical violence, as well as verbal violence, and certainly, the current climate in the country is quite violent—but I don’t really want to dwell in detailed depictions of violence.  As you put it, I prefer to “stalk the edge” of disaster. I know the wreck is there on the side of the road, but I’m not going to look at it directly. Also, what I  find emotionally and artistically interesting is the intimation of violence, the deliberate ignoring of it, and the residual emotions from it, the after-effects if you will. I’m drawn to the concept that tiny acts of violence (micro-aggressions and manipulations) are perpetuated every day by average people. Really, most people are gaslit, poisoned bit by bit, unraveled by casual cruelty, rather than explosive acts.

Q: How does this set of poems speak to your experiences in, and response to, current cultural landscapes?

A:  I am deeply disheartened by misogyny and racism—so that can’t help but come into my work. And I am concerned both with “showy” evil—so bald-faced it’s apparent to everyone—and the more insidious kind that comes in the form of the person who will outwardly say the right thing but who is quite willing to look the other way for his/her own comfort or advancement. To be where we are in today’s politics can only happen with a vast swath of enablers. The rhetoric of injustice and hate has real world consequences and creates an atmosphere that lends itself to emotional and physical violence. That keeps us from doing our most important work: scientific advancement, climate restoration, helping the poor, encouraging the arts, and carving out a new educational vision for the future. These poems are about how we can be lured into letting subtle toxicity into our lives (“False Jasmine,”  “Amanita”), how we should call out that toxicity (“Puffing Up”) before it destroys beautiful things (“Unravelling”) or hardens the heart.

Q: Unicorns are heavily symbolic images; they’ve represented religious, secular, and popular ideas through history, and are still widely depicted today.  What drew you to write about “The Unicorn in Captivity” tapestry?

A: Often when I’m working on a big project, I start to play around with ideas for the next project to see what will stick. When writing “The Unicorn in Captivity,” I had just been to a museum and was writing about some of the things I had seen, deliberately because they were not from the natural world. I saw a large tapestry (not “Unicorn”) and was overwhelmed by the fact that someone had to weave it by hand. That got me to thinking about all the tapestries hanging in museums and how reverent we should feel looking at these objects both for their beauty and because they took hours and hours to handcraft. And Beyond that, how really reverent we should be of all that is made in love and how we often we disregard it. Think of how important certain relationships are at a present moment and then years later, you don’t even know if the person is alive or dead, or what has happened to them in the days since. At the time of this poem’s writing, I was also getting ready to walk away from something loved that had turned toxic for me. I felt very sad about the loss of a labor of love. I knew that I would cease to exist in a certain way once I walked away. So, the poem is about the death of the beautiful, and grief.

Q: I noticed the many rhymes—and different types of rhymes—in “Puffing Up in the Apiary.”  What does your revision process look like when building a poem like this?  How are you able to arrive at such sonic coherence?

“Part of it was just trying different words and

in a weird way, not being afraid to be silly—

to go for broke.”

Luck? I was really inspired by Jill Alexander Essbaum’s use of sound in a poem called “Stays.” She’s just amazing and I wanted to try that type of usage. Then, this situation came up: someone said the first line to me and I thought it a really rude way to hide his own failure, to deflect his responsibility for creating a certain situation. After the remark, I wrote a friend an email and described it as a “gibe” meant to “disguise his own behavior” and noticed the rhyme which gave me the impetus for the poem. Part of it was just trying different words and in a weird way, not being afraid to be silly—to go for broke. The natural inclination, I think, is to make rhymes uniform, or to shy away from things that might be “too much.” (“smacked up self-centered language”). Instead of second guessing myself, I gave myself permission to just be agitated, to live in the poem’s emotional center.  I relied mostly on vowel rhyming (a predominance of long “i” and “o”), as well as “sounds” that hissed (“skew or screw”) or exploded (“packed in pretty”) to capture the buzzing of anger.

Q: Can you reflect on the function of ekphrastic poetry in our time?


A: To me, art is a conversation between one time and another, one person and another, about the continual renewable response to the human condition. Much of my poetry has been ekphrastic  (rewriting fairy tales, giving new perspectives on famous heroines, studying old photos). My father was an artist and when I was eight or nine he took me to the Art Institute of Chicago and we went through the galleries, and he would tell me about the paintings and painters, how Impressionism was originally an insult. For me, in that moment, the role of the storyteller and the value of how you saw the painting became imminently powerful. For example, Renoir and Monet painted La Grenouillére

side by side in 1869, each canvas stylistically different but equally lovely. As I moved along in life, the perspective which the creator/responder brings to art  began to fascinate me. What we bring to an artwork one day may shift depending on our mood, our age, our experiences with art, our economic resources, or what we learn about the subject matter. And these possibilities for shifting are endless, creating limitless impressions. It’s also where the root of human sympathy lies:  tell me what you see and I’ll tell you what I see and we’ll have a conversation so we may understand each other. The ekphrastic is essential.

Q: What other writers/artists influence your work, and what draws you to their voice or subject matter?

Maybe the most surprising influence on

my writing is Henry James’ The Turn of the

Screw, which stalks that edge of violence we

spoke of earlier better than any text ever written.

There are so many!  I love fiction writers from the 1920s—Hemingway for sharpness, Fitzgerald for poetic voice, Katherine Mansfield and Virginia Woolf for urgency and symbolism. And I love contemporary mysteries/thrillers, particularly the work of Megan Abbott and Karen McManus, as well as the magical works of Alice Hoffman and Neil Gaiman. The biggest (but maybe most surprising) influence on my writing is probably Henry James’ The Turn of the Screw, which stalks that edge of violence we spoke of earlier better than any text ever written.

Mary Oliver and Philip Levine are probably the first contemporary poets I deeply fell in love with due to their directness and poignancy. I am a major fangirl of Aimee Nezhukumatathil’s poetry, which I return to again and again. I think she’s brilliant, so sophisticated with what she’s doing with imagery and sound. She has such control. Ada Limón and Ross Gay engage with natural imagery in ways that are startling and beautiful and fresh. It’s probably quite common for people to say right now that Maggie Smith helped them during hard times, but that’s true, too. All of these poets are unafraid of being emotional about small moments, the things we have to carry, the belief that we must keep moving through despair. That is so profoundly hopeful.

Q: What are you currently working on?  How do these four poems fit within or stand apart from your new work?

These four poems are from a collection I’m working on about emotional toxicity told through the metaphor of poisonous flowers and plants. Ultimately, it’s about the journey of violation and loss but also transformation and recovery. Certain toxins we need for self-preservation and others we need to get rid of, even if they smell or taste good—and its central to know which is which. The idea is that sometimes we must tend or replant and sometimes we must uproot what is damaging and poisonous. Destruction, even cruel and heartless, can be a chance to transform. As Mary Oliver has put it, there are uses to sorrow. And to keep myself balanced, I’m working on a novel for middle readers with a fairytale theme.

Q: You are the founder of the literary journal Gingerbread House, which publishes poetry and flash fiction “with a magical/folkloric/fairytale element.”  How does this editorial work impact your own writing and vice versa?

I love working with Gingerbread House and the community of writers that has evolved out of it.  I know I can speak for my co-editor M. Brett Gaffney and myself when I say it’s an absolute privilege to read so much innovative work. GBH renews my faith that people can be generous and kind with every issue, both those that help create it (our great staff, the artists who donate their work, the writers who are so open) and those who read it (our audience is so supportive). We publish both established and new writers, so it’s great to work with people I’ve long admired and those who’ve just started out. It’s astounding really how much talent there is out there and inspiring to see how writers cleverly encode humanitarian concerns in fanciful ways. Working on the journal always heightens my enthusiasm to participate in the conversation, to sow some magic of my own. 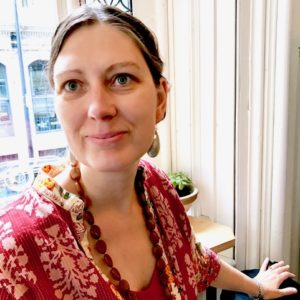