Your God says look behind you, watch your back,

Become the life in your hands, walk like a shadow,

Lose the afternoon, knot the hour, seek the future,

Tie your tongue, wherever you are

chant the names of the streets,

The colors of the doors,

The dread writhing outside the window —

And all along the long, self-perpetuating,

All along the imaginary, the woebegone.

Nothing can keep you from moving.

These clouds do not absorb repentances.

They drag under the sky.

Your God says this is desire wrestling itself from the branches

As the birds lord over the night,

As the old dogs yelp with the illusions,

And the night geometries of the crows do not abide.

Your God has not judged them as they subtract.

How long has it been since you yearned to be pierced

By the white sun? How long since it has risen?

The supernatural. You talking. Your God talking.

I could be the one who listens

In the smaller winds, in the noteless nothings.

Softly sweeping against the floor,

you naked in front of me,

Your God naked behind you.

Not the irretrievable voices,

I mean, threading out and in.

The Midday Light Is An Oasis

The midday light is an oasis

Blurred against the spring,

A spirit of the houses burgeoning

As if unwatched, unwisely

The last puddles turn the birds

To little tiaras in the air —

They burst and glare

Against the haloed leaves.

All at once they furl back,

Painted by a master

Of absence that shimmers against the brink

Of a chirruping return of light

A preposterous thirst for light,

A slow proud shrill for light

Striking out for emptiness

That passes as the birds pass.

Clouds, I Said, Will Come Of It

Clouds, I said, will come of it,

As when the mind is with doubt,

And frozen drops quiver out

Onto the giving ground.

And what of birds that stand around

That come from pools and spring

Into the countenance of things?

There was a sudden fact: a dream,

An eerie flood of wings. I stopped

And made a blessing with my hands

That rippled with the land

And twitching rocks and a blur

That, uncorrupted, cleared, then stirred,

And grass appeared, bird by bird.

I’m not sure I could believe

What I knew to be there.

The morning washed, and fair.

We wait more patiently than defenders of the faith

Nudging our duffs on and our ancient grudges

an inch or so

Toward king and country, toward thieves

And the last transformations

Toward a century of rust and due submission.

Others took to the new land peacefully,

Weaned themselves on the new ports,

Buttered up and upset and obedient,

Who brought the muffins.

All of this may have existed with mistrust —

The days existed, the heart existed,

As if existence were condensed.

Form of the mouth or the moon, like the emptiness

Of the latest news.

And off on the horizon,

Somewhere, was windless light and the Anno Domini

And the rain and the dove

And the blowhard body politic

that clubs the obscure

Amens of men and women,

As well as the omens and enmities,

In the name of God,

While on the top decks

Divided by slices of silence,

While everywhere you can see

The sea groans with fog

And the great ships that wander the ocean. 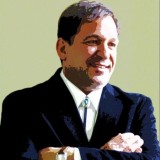 David Biespiel is the author or editor of ten books, including recent books of poetry Charming Gardeners and The Book of Men and Women; Poems of the American South, published in the Everyman’s Library series; and the forthcoming collection of prose, A Long High Whistle: Reflections on Poetry