Guest editor Robin McLean interviewed featured fiction author Nathan Leslie for this issue. Here’s what Leslie had to say about voice, the use of time and memory in fiction, and his drafting process.

Robin McLean: I really loved the story “Fly in the Ointment.” Congratulations on creating so much voice, atmosphere, tension—even tragedy—in such a compress little piece. I was especially interested in its treatment of the entanglements of class, power and sex. It’s impressive. Here are a few questions I’d love to know your thoughts about.

Where did this story come from? Can you talk about its origins? Were you intending to write a story about class, power and sex at a stuffy little country club?

Nathan Leslie: Thank you for the kind words. I play a lot of tennis tournaments (my other life) and a few years ago I happened to be playing a tournament inside a gated community when the idea for this story struck me.

Gated communities interest me because they are odd and surreal and this particular setting struck me as so entirely “perfect”—in an artificial/controlled way, of course. But I was interested in how it might not be as perfect as it looked, in small, elusive ways—thus the title. It was one of those perfect weekends we rarely get in the Washington, D.C. area—sunny and clear and low humidity—and I just had to write a story about this place. Not even about this place, so much, as about my perception of it.

So I played my first tennis match, took a few notes in the car, took a shower and then played my second match. I lost my second match but drove home with the seed of a story on the seat next to me.

RM: I love the forest in the story. Talk about the forest.

NL: I was interested in how this particular community was very fabricated, but also surrounded by this ancient forest which was partially decimated to make way for the houses, golf course, and so forth. That tension between nature and artifice is always worth exploring, and the community which inspired this particular story really was surrounded by this very impressive forest. Maybe not “old growth,” per se, but still quite dark and beautiful.

RM: Grover’s voice is vital to the story. It reveals to the reader while hiding from Grover himself, I think.

Writers talk about “voice” all the time. What do you think voice is? How do you explain it to yourself? How does it evolve in a particular piece for you? Is it a chicken-and-egg thing?

NL: It’s a great question and also a difficult one to answer. I love writing in the first person because it allows me to occupy the character and write from inside his/her skin. It can often give the story more texture. Voicey stories like this tend to be less predictable in syntax than my third person stories can be. So, for me, voice is just the very individual fingerprint of the narrator’s delivery.

RM: There are so many great lines in the story. I stopped to admire when Grover says, “I overshoot because I care,” about having too many items on his to-do list. I could picture Grover hanging out in the self-help section of the Fern Lake library. Can you talk about the role of self-deception in the story?

NL: Thank you so much. To me it’s the best of all possible worlds if there is a disconnect between the way the reader views the narrator and the way the narrator views himself. That type of clash makes a story more interesting for me as the reader, so when I’m composing a story I always aspire to that.

RM: The “over-shooting” remark also relates to Grover’s professed perfectionism. Can you talk about how perfection works in your writing in general? As an editor?

NL: I’m a terrible perfectionist in writing, teaching, tennis and life in general. So that aspect about Grover was quite easy for me to capture. Even after my books have been published I still think they could be better. Pretty much always.

RM: It seems to me that backstory, though understated, is an engine of great importance in this story: a dead father, a story-telling mother, a dead girlfriend crushed by a tree (the forest again). Good stuff—both bold and wonderfully restrained. Can you talk about how you think the past and present can, or must, play against each other in effective fiction? How do you decide how much of each?

NL: I don’t think there is a hard and fast rule. In some stories, memory and the effects of the past are more heightened; in others, the core of the story rests in the present of the action. It all depends. However, some temporal layering usually crops up—and so why resist the impulse? The past is important in this story and difficult to escape.

RM: The whole thing felt tragic to me, but not according to Grover. Do you think the story is tragic? Do you believe Grover at all when he claims contentment at the end with his new job, new life?

NL: I’m going to gently sidestep the last part of the question and leave that up to the reader. As for the inherent tragedy within the story, I was interested in addressing the societal expectations presented to Abigail and Grover. They confront a chasm, created by the ways in which society views gender and age—and there is a kind of tragedy in that and what unfolds, certainly.

RM: How do you write endings? Do you see one at the beginning, or does the ending arrive later? Talk about your drafting process a little.

NL: They are a tough nut sometimes. In this case, I know it took me some months to draft the ending. Yes, sometimes they could really be the beginning. I could go on and write another story about Grover, picking up where he leaves off here. However, that’s the beauty of the short story—the reader still wants more. My experience in reading many novels is the opposite. Enough, enough! Stop writing—you are ruining the art of implication! To me, as writer and reader, I don’t want everything handed to me.

RM: You are both a writer and an editor. How do the two roles interact with each other? Interfere? Enhance?

NL: They don’t interact that much for me—it’s the same thing with writing and teaching. Different parts of my brain are engaged in these activities and both editing and teaching are much more analytical, (probably) dogmatic and scripted, in a way.

RM: If you had to move alone to a desert island, what books would you bring? What three other items would you need to live?

NL: If I knew ahead of time that I would be stranded on a desert island, I think I’d have to suck it up and buy an iPod to download as much great music as I could, beforehand.

That would be first on my list. I would bring a massive ream of paper as my second item, so I could write all day long. For my third item, I’d bring a giant umbrella because otherwise I’d probably have skin cancer by the second month. As for books, that’s a much tougher call. But for a while I could survive just fine with the Tao Te Ching, some Nietzsche, and a handful of solid Norton anthologies with a smattering of all the greats. I’d rather have a little bit of everything…

RM: What are you reading now? What trends in fiction are exciting to you or notable or weird or depressing?

NL: Recently, I have been mostly reading the books of folks I’ve been interviewing for Prick of the Spindle. So, right now, I’m reading Heart of Palm by Laura Lee Smith, after having read most of the Lydia Millet oeuvre (interviews of both are forthcoming).

I’m also reading Tom Vanderbilt’s recent nonfiction book Traffic: Why We Drive the Way We Do, because he’s totally obsessed with traffic and I live in an area where sometimes this is all one can think about. Plus, it is interesting. I read the Keith Richards bio, the great Noble Savages by Napoleon Chagnon, and Nobody’s Fool by Richard Russo because I always loved the film and hadn’t read the book.

As for fiction trends, it’s interesting that you ask that because I think about that question a lot. It’s very, very difficult to generalize because so many writers are up to so many different things.

However, regarding the short story: to me, it’s a bit disheartening that many writers have steered away from gritty realism and embraced a kind of fictional aesthetic or interest which is either historical or genre-focused, or based on fabulism or the like. Those are fine ways to write but there are so many powerful stories happening all around us in our 2016 reality. But many fiction writers seem to have ceded these to the Internet and what magazines and newspapers still exist.

To some degree we’ve embraced fiction as a kind of escapism. The focus now is more other-worldly and imaginative in a somewhat flashy or almost television, movie-centric way and less grounded in the real lives of people around us. I know this is a vast oversimplification, but it seems mostly true. Also, many writers these days seem so fixated on writing pretty sentences that they forget that characterization is still the centerpiece of good storytelling. It is so difficult to find a fascinating character in fiction these days.

RM: What is your publishing life now? What are you doing with your days?

NL: I have a new novel that I have been shopping around and a short story collection based on Washington, D.C. exurbia that I have been sending out for the past couple of years. I’m hoping to find publishers for both relatively soon. It has become increasingly difficult to publish books, even in the indie realm—so many publishers are either inundated or they just aren’t reading new manuscripts for one reason or another.

I’ve also been writing a healthy number of new short stories and flash fiction, while dabbling in some essays and the occasional poem. Aside from the interviews I conduct at Prick of the Spindle, I am also writing a monthly music column for Atticus Review, which I have really enjoyed. I’m a music and concert junkie, so that’s something else to keep me busy.

Right now, though, it’s early in the fall semester, and as a full-time member of the teaching faculty at Northern Virginia Community College, I spend a good amount of my time prepping for my classes and grading. When I’m not doing that, I try to find some time to write, send out manuscripts, and play tennis. It’s a good life. I have few complaints. 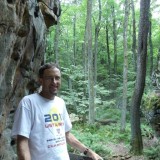