Fiction co-editor Grace Safford recently had this exchange with Issue #41 featured fiction writer Nathan Alling Long. Here’s what Nathan had to say about his approach to teaching writing, his favorite stories of 2018, and what he’s working on now.

“Last Sympathy” is a beautifully woven, bittersweet story that really wowed the fiction team here at the Mud Season Review. When the story landed in our inbox, we could tell a lot of care went into it. How long did it take you to write Last Sympathy? How important was revision to your process?

I began writing this in February 2015 and wrote the first draft in a day. Most of it was more or less in place, except for the end—in the first draft, I had Sey reveal everything in the café.  I got feedback from two different workshops, which both said that the main character didn’t struggle enough and that Sey wouldn’t have told him what is revealed at the end, since she’d hid it from him for so long. I was stuck then for a long while until someone suggested I end the story back in the apartment, since it started there. I started to rewrite the end, having Sey leave the café refusing to say anything, but I didn’t know what to do with Sanus. I wrote about him leaving the café and getting on the train, but I didn’t know how he would figure out the answer to his question about the hole.

Then it came to me: he should use the loom. While it was helpful to think about Sanus heading home, I didn’t feel like I had to get him all the way back to the apartment. I decided that he should figure out the answer while he was still underground, since the whole story deals with the subliminal.

Sanus, your protagonist, is such an interesting and fully developed character. It only takes a few paragraphs for the reader to understand Sanus as a person. By the end of the piece, it’s like he is a friend we have known for years. How do you develop a character so fully in only a short amount of space? What advice do you have for fellow writers on making such a complete, well-thought out character?

This story and character was inspired a bit by Haruki Murakami. He writes in a very clear way and often makes his characters seem simple and without any problems except the one conflict the story centers around. I decided to make Sanus a very clear, well-ordered person, with no troubled past.

Murakami also writes in a way that seems matter of fact—almost boring. When I read his work, it’s almost like a magician showing his hand, revealing all the cards, but still playing a trick on us. I decided to try to write that way, as though I had nothing to hide.

Lastly, I used the common practice of stating something, then giving three examples, such as:

He lived a quiet life, in a neat, well-organized apartment. His shirts were dry-cleaned, his bills were paid on time, and any broken appliance was repaired as soon as it caused a problem.

The writer Robert Cohen argues that in a good sentence, the syntax follows the meaning of the words. Following this advice, I tried to make the sentences above be orderly and neat, just like the character Sanus. So the form of the sentences hopefully helps reinforce the characteristics of the main character.

When my fellow fiction editor and I first read your piece, we were instantly drawn to the images of the loom and the tapestry. Where did the idea of the loom originate from? How important do you think is it for a story to have strong images/motifs?

I have no idea where the loom and tapestry idea came from. It was just a metaphor for talking about the way Sanus wove Sey’s stories together. But in the end, it became essential for making the discovery of the story his. John Gardner says all good metaphors rise out of the story, from specific images. I think images also point to the secrets in the story, the things you don’t understand or can’t figure out in the first draft. One of my teachers always said, go back to the beginning, mine what is already in the story. I think I was in trying to follow this advice when I figured out that the loom was the answer to Sanus’ problem.

Music clearly plays a big role in “Last Sympathy.” How much does music inspire your writing? Does it play an important role in your creative process?

Generally, music doesn’t inspire my writing—though occasionally I’ll listen to one album over and over as I write. In that case, I favor atmospheric bands like Low, Sigur Ros, or Eno.

For this story, I started with the idea of being moved by music. I wanted to capture that idea, separate from just hearing music. Pretty soon, the image of Beethoven creating music while deaf came up and then the title, “Last Sympathy,” which I think I mistyped or misspoke myself, just as Sanus did.

You have a published collection of flash fiction, The Origin of Doubt; write short fiction like “Last Sympathy”; and have been a finalist for the Hudson Book Manuscript prize. As a writer, you clearly dabble in a lot of different lengths of work. How do you know how long a story should be? What makes a story, to you, a piece of flash fiction over a longer work (and vice versa)?

Sometimes I sit down to write a 50 or 100 word story for a journal or contest, and I have to squeeze the story into the word count, but usually, a story dictates its own length. When I sit down to write, the story idea has a certain amount of energy, mystery, and force. It’s like jumping onto a rocket and seeing how far it goes. Sometimes it’s a toy pop-rocket, and other times it’s the space shuttle.

You are also a writing professor at Stockton University in New Jersey. What do you think is one of the most important writing lessons you have taught your students?

I like to point out what my students are doing well, as a way of showing how they can learn techniques from each other. I also like pointing out underused or missed images in their stories—what about the mouse in the woman’s purse? why is there a pool in the back of the house? what’s with that boy dressed in a pink shirt? Often, those tiny details in a story are overlooked but can be turned into a powerful metaphor or help propel the story forward—like the loom did in “Last Sympathy.”

This isn’t quite a workshop experience, but it could be.

I sent a story to a journal and they rejected it, but said that they had sat around the table talking about it for several hours. I was so happy to hear this—that my work had started a conversation—that I didn’t feel at all bad about the rejection. I realized then that that was what I really wanted: to write a story that inspired people to think and talk about it. In the end, their comment inspired me to write a new story based on a woman who writes only one story in her life and sends it to journal after journal, so that an endless number of editors read it.

The year is coming to a close. What are some of the best stories you have read in 2018?

When I received the acceptance for “Last Sympathy,” I went back and read the last few stories in Mud Season, and while I liked them all, I though “Vernix,” by Joe Baumann, was especially moving. I love how this thing of bodily shame was removed by the acceptance of another person, and then the magical element in the end, which suggests how the way we look at ourselves, how we think of ourselves, matters more than what our bodies look like.

I also really was impressed by the novel Exit West,by Mohsin Hamid, which I was first introduced to last year when I read a chapter of it, presented as the short story “Of Windows and Doors,” in The New Yorker.  I am in awe with the way Hamid portrays the love story, blooming in the middle of a Middle Eastern war, and conveys hope through the magical realist elements in the story.

I also loved “Inventory” in Carmen Maria Machado’s Her Body and Other Parties, the way it seems simply a list of sexual encounters during a time of disease, but how the reader comes to learn how making the list is itself a survival mechanism. There is something refreshing about how the narrator has sex with all kinds of people—men and women, sweet and savage—but how the politics of sexual orientation rarely enters into the story.

Lastly, what are you working on now?

I am finishing up a draft of a new novel called Harbor, which follows the lives of several residents of a coastal town as it experiences its first casualty of a distant and on-going war, violent hurricanes and flooding, and the mysterious appearance of refugees from an unknown country. The novel centers on Kat, a young artist working in a copy shop who is dealing with a brother’s death while trying to form a new identity, and the group of young people living in a collective house Kat moves into. Meanwhile, the town bridge is surrounded in political controversy, the police fence in the building where the refugees are living, and the storms rage on, both burying and revealing the town’s secret histories. 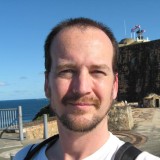 Nathan Alling Long’s work has appeared in over fifty journals and anthologies, as well as on NPR. His collection of fifty flash fiction, The Origin of Doubt, was released in spring 2018 from Press 53, and his collection, Two Stories, Some Tales, and a Yarn, was a finalist for the Hudson Book Manuscript Prize and the Iowa Fiction Award.  He is the recipient of a Mellon grant, a Truman Capote literary fellowship, and three Pushcart nominations.  He lives in Philadelphia and teaches at Stockton University in N.J.