Fiction co-editor Kathrin Hutson recently had this exchange with Issue #42 fiction author Stanley Delgado. Here’s what Stanley had to say about his inspiration for “Pool,” his approach to revision, how his work as a translator for medical journals overlaps with his fiction writing, and more…

What inspired you to write “Pool”?

It feels like I got very lucky. I feel like I’m finally at an age where childhood feels just far away enough that I can make out certain rhythms and patterns I couldn’t before. When I was younger I was just so, so painfully aware about my body. When I went to the doctor’s for a check-up and I got on the scales, I’d suck my stomach in like that would make it go away. And one summer I had swimming lessons at the Salvation Army and, like, the terror! Just waiting all week till Saturday came. They asked us to dive into the deep end and I just sat my butt on the rim and waited for the coach to come and carry me in his arms. And I was like nine, so, not the best feeling.

But I started writing it because I hadn’t read something like it before; a lot of the YA fiction I read when I was younger always treated being a fat kid in a really shallow way, like it’s all terror, it’s all about getting bullied, etc; it always felt like those stories were shallow because they considered their
readers shallow (kids in general). I really wanted to open that up, and I paid a lot of attention to the strong lineage of writers that complicate our ideas of childhood. It’s not that different from adulthood, regarding the etiquette and rules that feel made up yet control our lives. All of these intentions/inspirations came as soon as I started revising, though. The real, real, brutal inspiration, I guess, was just… Pools. As a concept. Pools always scared me. And I wasn’t the only one. So I started writing to figure out why.

And the Mom being a bodybuilder, and having a girlfriend — all of that actually came from another story I had based on a conversation I had with a friend, who’s own mom had done the same after battling cancer. Sometimes you get lucky, that things so far apart fall together so nicely that you can’t separate them.

How did “Pool” evolve as you worked on it, especially the ending?

The very first draft was 500 words long because I wanted to submit it for a flash fiction thing. The ending involved Steve Harvey like way too much, and had a lot of other confusing, magical elements in it. A friend of mine read it and told me to forget about the flash fiction thing, and to explore it further, so I did. The voice for “Pool” was hard — at some point it was twenty pages long (single-spaced) and some bits were in first-person, second-person, etc. It was such a mess. It wasn’t until I had the idea for Wendel’s school project that everything began to make sense, and I finally realized what I wanted to do — to kind of provide a somewhat objective point-of-view regarding Wendel and his actions, but at the same time, I wanted to give a glimpse of his inner life.

What adults take away from an event, what questions/answers they leave with, are different compared to a child’s, and I didn’t want to value the authority of one more than the other. The ending, at least the idea of Wendel and Mom diving under the pool and bursting back out, was kind of a gut thing. The actual writing, though, was something that I had to work out with Grace Safford, one of the fiction editors here, and it was her guidance that made the ending feel tangible, physical.

That is a very, very hard question. I remember reading this story out loud in a workshop and although the feedback was positive, the actual “takeaway” varied from person to person. I’ve always been terrible with theme, messages, and motifs, at least enforcing them. I would hope that someone could read this and find themselves in it. And I don’t mean to say that my characters are universal, I don’t entirely want them to be — but I hope that their feelings find some kind of resonance. I would hope that people could maybe realize how much magic there is in words and actions, how the way you act, whether you like it or not, is a participation in other people’s worlds. Kindness and anger, as well, to maybe consider those. How the end of one is the start of the other.

Could you describe your writing process? (Tell us about your writing process. Do you have a specific routine, time, or place where you write? Do you rely more on inspiration or steady work? What is revision like for you? How do you know when a piece is finished?)

It changes for each story. Sometimes I do the bulk of the writing on a laptop, or a notebook, or the blank pages in books. Inspiration usually comes in the middle of steady work, and even then, it’s not inspiration as much as it is me just figuring something out, how to transition into a scene or a thought. How to come up with the one analogy or description that will make everyone pause for a little and be like, ‘Well okay!’ That’s how I try to think of inspiration: not some grand idea bestowed upon you, but just the act of figuring things out; it’s constantly happening on levels so tiny you practically don’t notice them.

Revision is such a sweet feeling, honestly. You can actually see the story, somewhere in there, and you just have to kind of coax it out with a lot of patience. My revision process usually involves me writing the story again but by hand, not every single sentence but just the rough parts. I usually like re-writing on scraps of torn paper so I don’t have all of the authoritative weight of a notebook or laptop that just scream, ‘Finish me! Make me perfect!’ After all of that, I always show a few of my friends, some of whom write and some who just read. They’re usually the barometer for the story. I get to see what questions/answers they walk away with. And for the question of knowing whether or not something is “finished”… I really have no idea. I really hate being vague but, once you read your story over and realize that it couldn’t exist any other way. Maybe then.

So many. There are different writers that speak to me for different things. For “Pool,” the stories of Jenny Zhang and Carmen Maria Machado really helped me out, specifically “We Love You Crispina” and “Eight Bites,” respectively. My favorite writers always have an effect on me which I think I’d compare to a screw slowly getting loosened all the way out just before being tightened shut again. I think if any of them read that analogy I would die. My favorites right now: Laurah Norton, Manuel Munoz, Don Delillo, Yukiko Motoya, Nafissa Thompson-Spires, Joe Baumann (I’m so glad my work gets to share a platform with him in this journal), Branden Jacobs-Jenkins, and Ocean Vuong. And there are my other favorites, from a few years ago, who still teach me a lot like George Saunders, Toni Morrison, Maxine Hong-Kingston, Sandra Cisneros, and David Foster Wallace. Even friends on Twitter are so inspiring, how they construct their stories and histories and jokes and dramas; I honestly wish I could anthologize them.

The very first story wasn’t totally mine. In third grade, my grandmother told me a story about a man back in El Salvador who went hunting with his four dogs, and it ended with the man having a heart attack in the middle of the woods and, when the townsfolk found him, he was laying down with his arms and legs out like Jesus on the cross, and there was one dog at his feet, one at each of his hands, and then another wrapped around his head, and all the dogs were dead, too. Which is such a bonkers story for a kid to hear, I just had to write it down. I showed it to my teacher and she asked me to stay in during recess. She asked if everything was okay at home, and I just smiled like, ‘Yup!’

Usually I have a title early on, and it kind of guides the voice of the story. Even though “Pool” is kind of a bland noun when you think about it, but the significance and sheer weight I associate with that word helped me write this story, so much that in the middle of revising I’d think, Does the story sound like “Pool”? Does it carry the same senses of terror and joy I felt with pools? — also, I’m not actually asking myself these questions as I write — I’m not making a pro/cons list on a yellow legal pad or anything. These are just vague feelings I have while I write. I don’t want to make it seem like I ever know what I’m doing.

In your bio you mention working as a translator for online medical journals. In essence, this is a vastly different realm of writing than fiction. How have these two different spheres of writing affected each other, if at all? Do you find any overlap between them? Do you find one easier than the other?

There is a nice overlap between them, regarding clarity, I think. For translating —especially for something as exact and precise as medicine and prognoses, etc. — you really have no wiggle room for anything like “voice” — all of my translations are uncredited. It’s literally so objective it hurts. But this has helped me though. Kind of finding the beauty in sentences like “One is taken every four hours in order to numb the bronchial passageways. This should, in effect, stop any further spasm.” I don’t know. There is something nice about clarity as some sort of respite in fiction.

So much! From friends to professors to other writers and even random tweets. Ranging from things like, You don’t have to answer everything; Fiction as a bundle of direct, loving, honest energy; I read this one tweet that said, “PLEASE entertain me if im reading a book, I’m tired of reading about mfs who go fishing and suddenly solve they marriage or sumn [sic].” I think these are all things that pop in my head every now and then.

Right now I’m focusing on short fiction, along with directing a short film with some really talented friends soon. Besides that, I’m finishing the last year of my B.A. There are some random scraps of paper and Google Docs here and there that kind of suggest a novel, but I think that’s very far away. 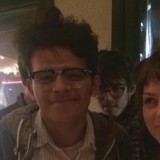 Stanley Delgado lives and works in Los Angeles. His writing has appeared or is forthcoming in The Sierra Nevada Review, The Santa Ana River Review, and Coriander’s.