You mention that your landscape work “depicts an apocalyptic world.” Can you talk a bit more about how you see this theme coming through in your work?

I tend to work on my abstract paintings when I am in an emotional crisis. A lot of these feelings are in reaction to things I read about and see on the news – there’s this perpetual sense of the world being on the brink of an apocalypse. Maybe it’s always been this way given the nature of news. But I think even before the pandemic hit, the issues around climate change were escalating. Painting is also a very isolated activity. You do it alone, there’s no certainty people will ever see you work, and it can feel like screaming into the void. So I never wanted to include any figures in the landscapes I paint. The results are these barren, empty landscapes. Like, what does the earth look like after our world has ended? They feel apocalyptic to me.

You also mention using Eastern ink painting and abstract expressionism “to explore the sense of fracture and conflict within [your] bi-cultural identity.” How do you see your identity represented in these approaches?

Collecting art is sort of a family tradition on my father’s side, and as a kid I was surrounded by a lot of traditional calligraphy and landscape painting. At the same time, growing up in NYC meant that I was exposed to a lot of modern art from the West. Abstract Expressionism was one of the movements that drew me the most–there is an emotional immediacy to it that felt to me, at the time, like it could move beyond the borders of racial and cultural identity. It wasn’t until much later that I realized how much of my attraction to it is fundamentally informed by my early exposures to Chinese art. There’s a sort of yearning, a searching for the familiar in the gestural, the brush-based mark-making. And of course many of the Abstract Expressionists were looking at Asian art, painters like Franz Kline and so on. In my work now, I think of meshing the two aesthetics as a way to both play with and collapse that sense of binary – my identity at “home” with my family, and the way I move through the larger world as a second generation immigrant raised in the US.

This series was created using acrylic on canvas. Why this medium for these pieces? How do you determine the medium for a particular project?

I like the wide range of possibilities with acrylic – you can apply it super thick, like oils, but also thin them out into watercolor-esque washes. They dry faster than oils as well, so I can do multiple layers in a relatively short period of time. The unprimed canvas was a new direction for me. There’s something so compelling about the natural fraying that happens – it reveals canvas for what it really is. I wanted to push that further, really play with these ragged, undone edges. It matched the feeling I was going for with these paintings, that rawness, the sense of revealing something essential as it breaks down.

What do you mean when you say “land becomes a metaphor for the mind” in your work? 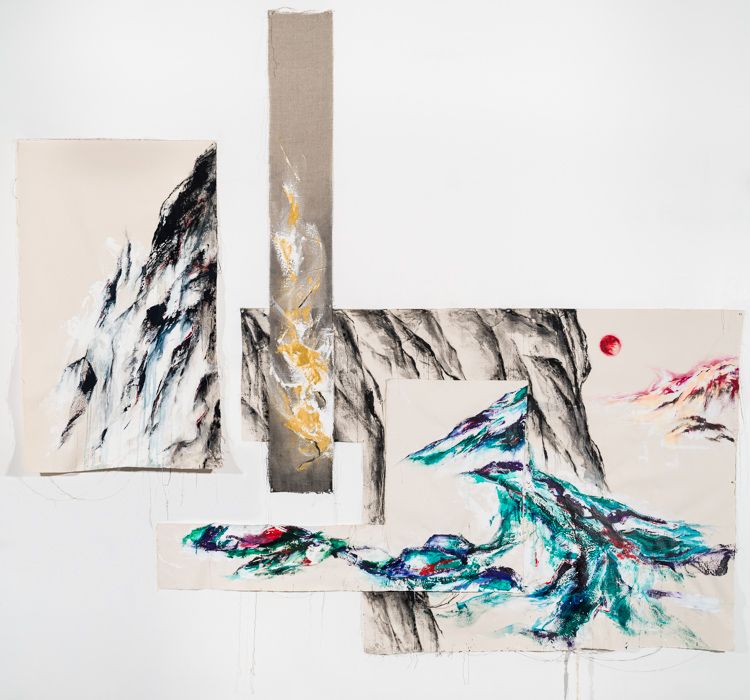 The genre of landscape painting in Chinese art is called “shan shui”, literally mountains and water. It’s sort of become tradition that the recurring motifs of mountains and water are nonliteral, more reflections of the subjective state of the artist. I wanted to run with that thought, and use the land as a metaphor for the modern mind. I think there are a lot of parallels now with what’s going on environmentally, and with people’s mental health. The increasing speeds of consumption and production are destroying both.

I was a double English and Education major at Barnard, and also did a few independent studies in art. I loved being a student – the freedom to study whatever I wanted.

It’s such a luxury to live in New York as an artist, but it can also be overwhelming. There are always a million shows to see. It’s both incredibly stimulating and hard to keep up with, when you also have the pressure to produce your own work at the same time. But really, it’s a privilege. I miss being able to go see shows in person.

You were awarded a Centennial Scholars Fellowship while at Barnard. What was that experience like?

It was an amazing experience. The fellowship essentially gave several of us $4,000 each, and both total freedom and institutional support to fulfill a project according to our personal vision within two years. I don’t think I realized at the time how incredible this was. I wasn’t officially studying visual art, but it meant that I got to take classes at the International Center for Photography for free, be mentored by art professors in independent studies, and eventually put up a solo show in my senior year. It taught me how to work in a sustained way, to stay focused on one idea even when working across media, which I am still grateful.

Can you talk about some of your other exhibitions and publications? Where can we find/see your work?

Sure! I have a few pieces in the upcoming issue of Passengers Magazine, and at Trestle Gallery through their Member Salon show, which was curated by Dexter Wimberly. I’m also showing two paintings in an upcoming group show about climate change at the Oxford Alliance of Art, and at a “31 Under 30” online exhibit at www.michaelrosenfineart.com.

You are currently a 2020 resident at Trestle Art Space. What is involved with the residency and how has your experience been impacted by the pandemic?

The residency has been a lifeline in terms of having an artistic community despite working in physical isolation. Originally I was supposed to move into a Trestle studio in March, and I was really looking forward to being in closer proximity to other artists and getting to do more studio visits. While that hasn’t been possible, the residency meetings have still been happening on a monthly basis via Zoom, and it’s still been nice to be able to share work and be part of critiques. My cohort has been really lovely.

I took a look at your project on your website. Please talk a bit about that project and what it means to you.

Thank you for taking such a deep look at my work and asking such great questions! I do have to start with a disclaimer for this one – the series is very much in progress, and the images on my website right now are more ideas rather than fully fleshed out works. I’m in the process of remaking them on a larger scale, for one.

I started thinking about this project around 2016, when I was having a lot of conversations about politics with my family. In our disagreements, what I found the hardest to deal with was when they thought my ideas were too Americanized, and somehow alienating to their Chinese values. Given the events around race that were happening in the larger discourse, I was feeling more strongly about being part of the Chinese diaspora than before. I wanted to find a way to reconcile these things.

I was also thinking a lot about childhood influences at the time, and specifically the stories that I grew up hearing. Even after becoming fluent in English, I never knew what other kids were talking about when it came to pop culture references. The folktales my mom would tell me, on the other hand, had the potential to connect me to other people. And so many of them actually reflect the values that my parents see as overly Western.

I  started to paint specific folktales and myths that related to certain issues, to try to find common ground, and also to celebrate these stories. The text next to the painting talks about the event or political idea that the myth correlates with, in Chinese. The text on the paintings is in English, and retells the story, so that viewers who are not Chinese can access the work as well.

Why did you become an artist? Who (artists/creators) inspires you? What are you currently working on?

I never really thought it was possible to become an artist. My parents were adamantly against me going to art school. Getting to do the solo show through the fellowship was my way of resistance, but I still didn’t really think it was possible to do it “for real.” I was making art at night, after full days of working or interning or taking classes. I worked for years as a teacher after graduating, and painted on the side when I could.

I don’t know why exactly, but I guess I just gradually came to the realization that the wanting wasn’t going to go away. I was never going to feel satisfied doing quick little one offs here and there. So I quit my job a year ago and threw myself back into art. The freelance life comes with its own set of anxieties, but I’m much happier overall than I was before.

There are so many artists that who inspire me. There are some really amazing painters working right now – Cy Gavin, Elliott Green, Eileen Lin, I could go on. The original Abstract Expressionists like Joan Mitchell, Franz Kline, Wassily Kandinsky, of course. And traditional Chinese artists, like Bada Shanren and Gu Kaizhi. I also have a huge soft spot for the anonymous painters and weavers who made the Buddhist tapestries and monumental wall paintings that you can see at the Rubin Museum. There’s such devotion in these pieces – they’re so intricate – and no ego. They don’t even sign their names.

For now, I’m continuing to work on my mythology series, and experimenting more with abstract landscapes. There is so much to think about with both, I imagine I will be working on them for a while!

Elaine Pentaleri is co-editor-in-chief for Mud Season Review. She lives on 23 acres of field, woodland and stream in Starksboro, Vermont. Elaine holds advanced degrees from both Alfred University and the University of Vermont. A poet and teacher, she is currently board co-chair of the Burlington Writers Workshop and president of the board of directors of the Willowell Foundation. Elaine’s work has appeared in small press publications, including Off Channel, Anderbo.com, New Milennium Writings, ZigZagLit, Cold Lake Anthology, The Black Mountain Press, and elsewhere.