Kristin LaFollette interviews Issue #54 artist Linnea Ryshke on the imperative of human kinship with all animals, going out of her comfort zone for a medium, and etymology in her titles.

As gently and tenderly as I could, I separated out the bones, ground them to dust with the head of a hammer, and then sprinkled these remains on the canvas.”

You work with so many different materials and mediums in your work. How would you describe yourself as an artist?

My process as an artist can be summarized as continual intrigue and longing. Material-wise, I love to find new combinations of materials that are sensorially evocative. Because paintings and drawings are haptic images—that is they have a “feeling” to them, as in a sensorial quality—materials are really important to me. A drawing made from ash will feel very different than the same drawing made from black ink. I try to choose materials with this in mind.

You note that your mixed-media work responds to “the ethical imperative to restore our relationship with nonhuman animals, who are continually Othered in contemporary life.” As a lifelong vegetarian and animal lover, I am intrigued by this approach. How did this become a driving concept for your work?

About nine years ago, I became aware of my blind spot towards the lives of other animals. Of course I “loved animals,” as many people say they do. But I wasn’t attentive to the quality of the interactions I had with other animals—from those on my plate, to those on the sidewalk, to those behind glass walls in the zoo. I’ve come to believe that directing our attention and empathy towards other animals is an ethical imperative. There is no other way forward—whether in the context of inequality, the climate crisis, or health crises like pandemics—than to recognize our interspecies dependency and vulnerability. We must reestablish kinship with the animals with whom we share this planet, as our fates are entwined. In my life and in my art, I seek to be part of this necessary shift in cultural norms, for art has always been integral to social change.

How do you decide which animals you will focus on in your art?

I have always been drawn towards birds. But in this particular series, I focused on chickens and cows. I find them to be most ubiquitous in daily life; that is in their fragmented flesh form.

The use of chicken bones in Unburial is fascinating. What inspired this choice? Why use actual animal bones in an art piece that challenges viewers to approach all animals with empathy and respect?

I’m glad you asked this question, especially considering animal “by-products” are used in many art supplies, and traditional methods like priming a canvas with rabbit skin glue. My process of making is very important to me and I take it seriously as far as ethical concerns. In making this work, I centered on imaginatively empathizing with animals raised to be food, whose experiences are so confined. I wanted to do something that would make me feel closer to them and their bodies.

I went to a smokehouse near my home and asked them for the carcasses of chickens that they would otherwise throw away. I boiled these carcasses, along with chicken bones I’ve found on the street. This was very uncomfortable for me, as I am repulsed by the smell of flesh. As gently and tenderly as I could, I separated out the bones, ground them to dust with the head of a hammer, and then sprinkled these remains on the canvas. The whole time I touched and worked with the remains, I held in my mind the reality from which they came: 99% of chickens are raised on factory farms, and these bones of these birds literally cannot hold the weight of their bodies, which are bred to grow as fast as possible.

You mention that you received your MFA from Washington University in St. Louis. I just visited there a few months ago and it is one of the most beautiful campuses I’ve seen. What was your experience like studying there? What was it like studying at Pratt Institute in New York for your BFA?

I am really grateful for both of my educational experiences. At both institutions, I had some very influential mentors and instructors that challenged me. I appreciated Pratt’s more traditional structure for my undergraduate degree, as it allowed for more specialization. They also have great environmental and animal studies classes, especially for an art school. Wash U focused intensely on the conceptual framework for the work and the ability to articulate the “why” and the “how.”

Talk a bit about the title of this collection–The Always and Never Seen–and some of the titles of the individual works (i.e., Host, To say their own names, Cleaved).

The Always and Never Seen refers to the fact that animals raised for consumption or “livestock”—chickens, cows, pigs, turkeys, etc.—are always seen in that they are ubiquitous in our everyday life in the form of sausage, patties, milk, eggs, and laced in most processed food. Yet, as full, feeling, breathing animals, they are absent. We do not see these animals, and are not meant to in order to keep the system oiled and running. The titles of the works however are a bit more ambiguous. As someone who thinks in poetry and analyzes in etymology, I love words, their sounds and their meanings.

For Host, the title emerged from my writing about the multiple definitions and roots of the word “host”: a multitude; a stranger; a living animal on which a parasite lives; and the consecrated bread for the Eucharist. The word resonated with the image both in the way that the lines of the cows’ bodies are multiple, as if they are vibrating, and the fact that these animals are indeed strangers to us. My painting in some ways makes even more strange or unfamiliar the site of two tagged cows.

Similarly, the title Calved originated from my writing about the word as meaning both to give birth to a cow, and the splintering of glaciers. In the image, the cow herself seems to be dissolving or fragmenting. Sometimes titles come to me as a phrase when I am working like, To say their own names. As many of the works show the animals with an open mouth, this title refers to the animals as agents, “speaking” their own names, when those we’ve assigned to them like “beef, cattle, livestock, chicken,” fall far short.

In your artistic process, what does it mean to create “through expressionist mark-making and material tactility”?

I’m more interested in evoking the presence of an animal, rather than depicting her through hyper-realist rendering. I use mark-making—that is the quality of a material through the movement of my hand on surface—to create the image of the animal. In many of the works, this means that they are merely line, shape or color and sometimes unidentifiable at first. I want them to retain an elusiveness in form. In my encounters with nonhuman animals, most moving to me is the quality of their presence, one that is both unbreachable and mysterious, yet also somehow speaks right to my own being.

It’s clear your work (artistic and other) is focused on activism and social justice, including your experience working with Culture Push in New York. What projects were you involved with during your time there?

Culture Push is such a unique organization (shout out to Clarinda Mac Low!), as it does so much (projects, events, happenings) with relatively little (small staff, small budgets). I was involved with the Fellowship for Utopian Practice, which supports socially-engaged projects around NYC. It’s a really special program that helps incubate and realize a wide variety of projects, and is not outcome-based. In the era of grants and fellowships that want an exact articulation of outcome, Culture Push is unique in being process-based, mentoring artists in their work. I also edited an issue of the online publication, PUSH/PULL, tilted “Entering the Space of the Absent Referent.”

Your bio mentions you are also a poet. How does this role intersect with your identity as an artist? Where can we find some of your poetry?

Yes! I am actually releasing a book of my poetry and artwork with Lantern Publishing and Media in September, 2021! It is titled Kindling and features some of the work mentioned above as well as a series of poems I wrote while working at a small family farm.

Which artists and/or creators inspire you? What projects are you currently working on?

I’m inspired by artists who tend the fire of social renewal, by those who entwine their passion as citizens of the Earth with their drive to create and make art. I’m in awe of the photographs and projections by Colleen Plumb, humbled by the beautiful drawings by Zaria Forman, shaken by the sculptures of Doreen Garner. I find the intersection of the beautiful and the painful to be catalytic.

Currently, I’m creating a series of works based on my weekly ritual of visiting the zoo near my home, which I have been doing since June. The works are becoming about the lack of belonging these captive animals have, as they live their whole lives separated from the specific part of the Earth in which they are enmeshed. The series is a continuation of my desire to shift the perception of other animals as consumables, objects, and ornaments, to one that acknowledges them as kindred beings integral to the divine heart of the world. 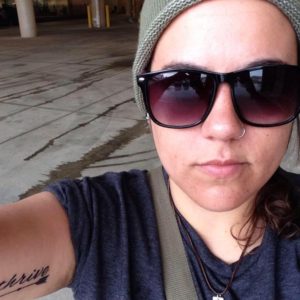 Kristin LaFollette serves as the art editor for Mud Season Review. She is a writer, artist, and photographer and is the author of the chapbook, Body Parts (GFT Press, 2018). Her artwork and literary collage work have been featured in Slippery Elm Literary Journal, LossLit, Cordite Poetry Review, The Hunger: A Journal, and others. She completed her Ph.D. at Bowling Green State University and is a professor at the University of Southern Indiana. You can visit her on Twitter at @k_lafollette03 or on her website at kristinlafollette.com.