“My goal is for the language to initially sow confusion in the reader, to put them ever-so-slightly off-kilter, but for them to eventually get used to it.”

“Gone from the World” is deeply entrenched in tradition, family, and language. These themes move elegantly together throughout the story. Where did this knack for writing about culture originate?

Tolkien compared story-writing to a compost heap, saying that stories spring organically from “all that has been seen or thought or read, that has long ago been forgotten, descending into the deeps.” I think he was absolutely spot-on. I can trace almost nothing in my life to a precise origin. It’s safer to say this story grew out of a simple desire to write. What emerged was just one of many creative shoots born of past experience. We all feed our compost piles with various things. Much of mine is composed of language studies, travel, and history. These are all central to how this story was crafted.

It’s clear to me that it truly matters how we spend our time — in art, as in life. Because how we are as people is forged by our activity—what we watch, read, listen to, look at, and who we hang around with. All this gets thrown on the heap, breaks down over time, and much of it will serve as energy and content for our future creative endeavors. I know what I want to write about in broad terms. So I surround myself with such things, waiting for the next sprout to surface.

Was it a difficult decision to incorporate the use of a second language in the story?

I first started this story in December of 2015. With only the inkling of an idea in my head, I composed the first and last paragraphs. They sat for almost three years, until I found myself reading Haruki Murakami’s After Dark. One of the characters is a Chinese prostitute living in Japan, and Murakami writes some of her dialogue in Mandarin. Having studied Mandarin, I thought to myself: I’d like to try that. Once that seed was planted, I worked through most of September with my book-ended introduction and conclusion, leading my characters from beginning to end.

Did you have difficulty achieving what you wanted with the language? How did this influence how you approached this story structurally?

While it wasn’t difficult to craft the language in the way I saw fit, what proved tricky was the interweaving of the raw Chinese with its explanation without sounding redundant or too on-the-nose. For instance, can we expect the reader to glean the meaning of dui bu qi with no English translation? From context, I think we can, though certain nuances are at once added and lost. So, the inclusion of another language was very important to me, not just in terms of growing as a writer, but in terms of more fully building the atmosphere I wanted to set for the story.

While I sought to include famous Chinese poems and cultural referents, language was the largest part of that puzzle for me. My goal is for the language to initially sow confusion in the reader, to put them ever-so-slightly off-kilter, but for them to eventually get used to it. From there, hopefully they get a sense of at least the look and feel of Mandarin, and that it eventually becomes an expected part of the story—a story that would be the poorer without it. Perhaps it will even inspire some people to try their hand at learning it.

Family dynamics in “Gone from the World” are intricately layered, with a delicate play between the different generations. Is this reflection of relationships something that comes from personal experience?

In terms of direct personal experience, the relationships in this story are highly dissimilar from those in my life. While I certainly feel an ineffable (and unpayable) debt of gratitude to my parents, I do not have the sense of robust filial piety at play in much of China (and to an equal or lesser extent in other parts of East Asia). My one surviving grandfather, for instance, is as purposefully self-sufficient as possible. I’ve never known him to burden another person in any way. He balked at the idea of even moving near my parents. While I’m sure there are subtle aspects of my family history in the story, I didn’t consciously craft them after my own life.

While the case could be made for any traditional culture now modernizing, it seems especially poignant for China. It’s difficult to express this succinctly without sounding overly cliché, but we need to remember that the world of our upbringing, as obvious and clear as it seems to us, was not the world of our grandparents, let alone our parents. Transition over the course of an individual life is difficult enough, keeping up with the world’s changes. But we have to remember that our elders are, in some ways, catching up to modernity, just as those that come after us will start out with modernity in the rearview mirror.

What was the research, if any, you put into this story? Do you have a process for researching your stories or a history of doing so?

There are theories, tables, charts, and prescribed behaviors for every possible way of life in China. Because Chinese culture preserves so much of its history in its language, the things I found myself looking at most were linguistic in nature — idiomatic expressions like chengyu or Maoist slogans from the Chinese Communist Party’s five-year plans. (These latter are generally so awkward as to be self-lampooning.) Other than that, I did very little research. I would say my fiction-writing research is entirely driven by curiosity, and happens in a space distinct from the writing process. Certain things enter into stories because I’m interested in them, and very rarely solely because the story demands it.

Love and death, regret and shame, are powerful themes and the tone of the story is in correlation to these emotions. How do you build characters that express such complex thoughts and behaviors?

Because I believe that all humans share the same basic desires and aversions, what interests me particularly is how individuals come to grips with these things, how they change their lives in reaction to their realizations. The key is to create a situation, a look at it in different ways based on your knowledge of humanity. How do people react to boredom, or torpor? To change? To turn unexpectedly good or bad? Once you have the initial feeling, thought, or perception, the job becomes translating whatever-it-is-that-springs-up into action — how does the reaction manifest, and what is the most artful way you can portray it?

The ending certainly comes as a surprise, and all the beauty created in the story is stripped bare as the true darkness of the characters’ predicament becomes inevitable. How did you arrive at this ending?

This question made me laugh initially, because one of my friends, upon reading this story, told me that she knew with certainty the ending from very early on (though not the precise details). I also knew the ending long before I knew anything else — before I had even sketched a single character, in fact. I hadn’t ever paused to consider why I arrived at the ending (and I still don’t quite know — I don’t think I could ever, for the reasons given in the first response).  But I think my larger critiques of the CCP were at the root of it. I won’t go into the gruesome details of governmental malpractice at the hands of the CCP. But I will say that their peculiar brand of totalitarianism needs to be taken to task as much as possible. The end of my story doesn’t seem too beyond the pale for the CCP, and isn’t too different in effect from some of the attendant consequences of the One-Child Policy.

What did your editing process like for “Gone from the World?” Do you spend a considerable amount time working on edits?

I edit assiduously in terms of English-language mechanics, which takes me a great deal of time, but that’s not all editing is, of course. I also had a few people read this story prior to its publication, and their feedback was critical in shaping, among other things, the interplay of the characters. Finally, the good people here at Mud Season Review were immensely helpful in tightening the story to its current form. I’m truly appreciative of everyone who’s given this story their time and attention.

What do you view as your immediate writing future? Do you have other projects in the works or nearing completion?

Honestly, I don’t know. I don’t have any true long-term plans for my writing; it’s simply a beautiful hobby I’ve stumbled upon. So, I’ll just keep writing as the fit takes me, and see what happens. I have quite a few irons in quite a few fires at present, but very little is near completion. My writing usually slows down tremendously during spring and summer due to the active nature of those seasons, so I’ll see what’s still smoldering in autumn.

What do you recommend for a fiction writer on their path to publication?

I’d suggest simply to cast a wide net, after you’ve found outlets you respect. I don’t think one should seek publication just anywhere. It ultimately depends on what one’s goals are, of course, but throw as wide a net as you can do judiciously. I’ve found that stories find homes in sometimes very unexpected places, and while each work doesn’t necessarily fit everywhere, it does fit somewhere. It’s just a matter of time, attention, and luck in finding that place where it does. 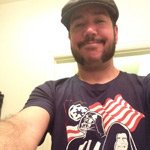 Josh Michael is associate fiction editor for Mud Season Review. He is a writer and educator living in Billings, MT, where he works as an adjunct at Montana State University-Billings, and as a poetry teacher for the non-profit Arts Without Boundaries. He has an MFA in Writing from Vermont College of Fine Arts, and attended Berklee College of Music in Boston. In his spare time he is a drummer in various rock and funk bands.