Our fiction co-editor, Robin Parker, recently had this exchange with Sandra Hunter, our Issue #13 featured fiction author. Here’s what she had to say about the inspiration behind “Brother’s Keeper,” her interest in the perception of otherness and the shifting complexities of identity, and the novel she is working on now.

A number of my short stories are based in countries where there are political and social conflicts, such as Egypt, Afghanistan, India, and Libya. Example: In one story, set in Morocco, four young girls plan to escape their violent husbands and find a boat to sail to Spain (“Jewels We Carried With Us”). While a number of the stories deal with individuals who are fleeing, I realized I hadn’t written from the perspective of the refugee in the adopted country—What would it be like for the refugee to arrive? I was also interested in how a family might deal with welcoming someone with refugee status.

I hope that readers connect with that sense of stranger-ness, otherness that comes from being in an unfamiliar environment. It doesn’t have to be emigration: It can be moving from one emotional state to another. Breaking up with a partner is one of the most difficult transitions imaginable: How do you navigate the world—that ought to seem familiar—that is now filled with too-bright/drab colors, smells, shapes. How do you sleep at night in a bed that has become unfamiliar? How do you eat when your body rejects the food?

Elijah has to tread between two worlds: the strife-torn one he’s just left and the imbalanced one he’s arrived in. Nothing makes sense: even the two kids, Eddie and Blake, have skewed perceptions of their world. And yet he tries hard for normality. He cooks for them, sits and talks to them. He tells them about his hometown. That all of this doesn’t work, in the end, isn’t his fault, nor the kids’, nor even Indira’s. Each of them is struggling with some kind of identity issue.

We constantly move between the shifting complexities of identity. Ultimately, who we are is a splodgy, uneven, wildly colored amalgam of what was and what is.

This piece has a lovely lyrical tone, can you talk about your use of language and how you developed the style?

Thank you! I’d like to answer this by referring to the writers who have deeply influenced me: Michael Ondaatje, Arundhati Roy, Ilya Kaminsky, Antjie Krog, Chris Cleave, Robert Macfarlane, Ismail Kadare, Kaye Gibbons, among many others.

As a writer, you have your own voice, but you come into it by reading other people whose work resonates. Sometimes, the subject matter may not resonate but how that writer expresses his or her ideas may be utterly captivating. You may love most of a book but get hung up on something your analytical mind starts humming over. Meanwhile, the mind that appreciates the writing just flows with it all. Being able to live with that paradox, and appreciating that you won’t love absolutely everything about a book, is crucial for discovering new writing that, in turn, enhances and develops your own.

Reading has always been an essential part of writing.

Arrghh—the Evil Second Novel! My debut novel, Losing Touch, was published last year by OneWorld Publications. I’m now working on the second novel. Here’s the pitch line: Motsumi, a Sotho, and Jan, an Afrikaaner, marry in post-apartheid rainbow nation euphoria. When their nine-year-old daughter is bottle-raped by a street gang, the family must fight to survive and adapt to the harsh reality of the New South Africa.

Again, this deals with issues of identity, this time through interracial marriage and bi-racial children.

Because this is written between two narrators, it’s important that the language is “true” to their voices. So I have to kick out anything that sounds like my voice! No lyrical wandering around here.

Also lovely was being able to go to South Africa in June. It was beautiful, brutal and eye-poppingly educational. I was able to meet and talk with an extraordinary range of people. Everyone I met was open to discussing interracial relationships, racism and xenophobia—from stall owners, tourist attraction work crews and taxi drivers to actors, research analysts and film documentarians.

From editor Herta Feely: The story you’re writing may not always be the story that wants to be written.

This was excellent advice while I was struggling with a very early draft of the second novel. As my main narrator, I had a character with a strong voice but she had nothing to do with the central story! Excising that character was painful but necessary.

Writing process: For short stories it can vary. Sometimes it starts with a voice and with other stories there’s a particular story that is compelling. For example in “30 Below” I wanted to tell the story of a boy going through one of the tunnels between Palestine and Egypt. That story was clear before the boy’s voice developed. However, with “In-Breath” the narrator’s voice, a twelve-year-old Indian girl, was very insistent.

Writing isn’t necessarily linear. I may start in one place and go along for a while and then break off and move to a different section. That’s definitely how I approach long fiction.

Revision: Endless. I keep going back and going back until it feels like it flows. I always read everything aloud. This is crucial for voice-driven stories. The dialogue must feel natural and not expository, and so on.

“Snake In Homa Bay.” I drew on my experience in Kenya to write about this encounter between a volunteer who has been in-country for over a year and his pushy girlfriend who comes to visit him and is appalled that he doesn’t have shower facilities. It was published in Transfer, San Francisco State’s student-run literary magazine.

It’s such a beautiful story that addresses war. Druon writes so simply and accessibly about dying that I understood it, even as an eight-year-old. I loved how Tistou made flowers grow in hospitals, slums and even from the mouths of guns. My brother made me promise not to read the last line of the book before I read the rest, but I did: Tistou was an angel. So now I’ve spoiled the story for you! 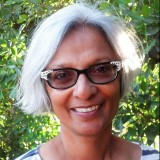